Liquid crystals derived from borophene have risen in popularity, owing to their immense applicability in optoelectronic and photonic devices. However, their development requires a very narrow temperature range, which hinders their large-scale application. Now, Tokyo Tech researchers investigated a liquid-state borophene oxide, discovering that it exhibited high thermal stability and optical switching behavior even at low voltages. These findings highlight the strong potential of borophene oxide-derived liquid crystals for use in widespread applications.

Two-dimensional (2D) atomic layered materials, such as the carbon-based graphene and the boron-based borophene, are highly sought after for their applications in a variety of optoelectronic devices, owing to their desirable electronic properties. The monolayer structure of borophene with a network of boron bonds endows it with high flexibility, which can be beneficial for the generation of a liquid state at low temperatures. Thus, it is not surprising that liquid crystals derived from 2D networked structures are in high demand. However, the poor stability of borophene, in particular, makes it difficult for it to undergo a phase transition to the liquid state.

In contrast, borophene oxide—a derivative of borophene—can improve the stability of the internal boron network, in turn stabilizing the entire structure. This property of borophene oxide is different from that of other 2D materials, which are unable to yield liquid crystals without the use of solvents.

To compensate for the lack of suitable liquid crystals, a team of researchers from Japan, including Assistant Professor Tetsuya Kambe and Professor Kimihisa Yamamoto from Tokyo Institute of Technology, investigated the properties of a borophene oxide analogue as a fully inorganic liquid with a layered structure. Their study was recently published in Nature Communications

Initially, the team used previously tested methods to generate borophene oxide layers (BoL) as crystals (BoL-C). They then converted BoL-C to liquid crystals (BoL-LC) by heating them to temperatures of 105-200℃. They observed that the resultant dehydration weakened the interactions between the interlayers of BoL-C, which is desirable for its flexibility.

The team then analyzed the structural properties of BoL-LC using polarized optical microscopy, discovering that BoL-LC sheets are found stacked parallel to the surface of the liquid drop with a slightly curved form. This spherulite orientation of borophene sheets was confirmed using scanning electron microscopy. 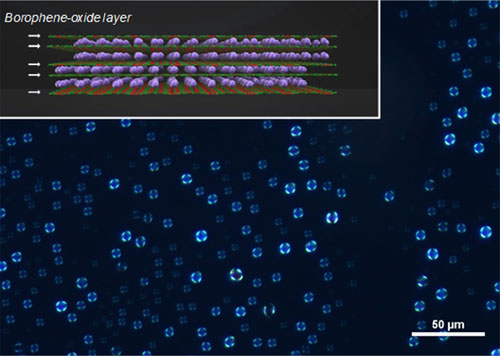 An analysis of the phase transition features revealed that phase transition (P-ii/P-i) occurred at around 100℃ for BoL-LC. In fact, both transition phases exhibited high thermal stability at extreme temperatures. The team also observed a highly ordered orientation of the P-ii phase. 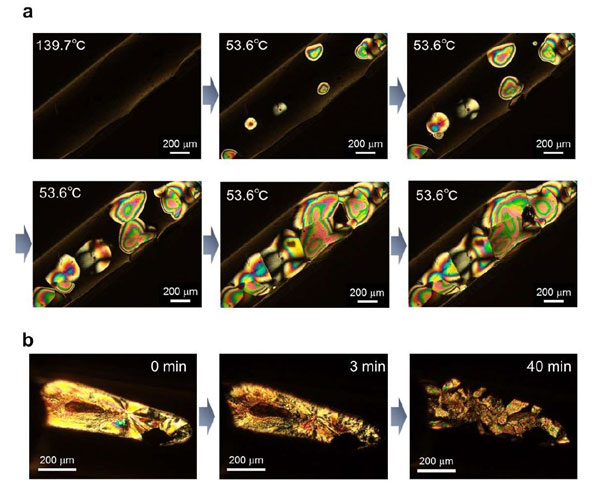 To test its optical switching behavior, the team created a dynamic scattering device using BoL-LC, and found that unlike other organic liquid crystals, the BoL-based device responded well to voltages as low as 1V. These findings highlight the feasibility of inorganic liquid devices in harsh environments.

"Although a liquid crystal device using graphene oxide has been reported previously, it was a lyotropic liquid crystal, with a strong dependence on the solution concentration. Therefore, the previously reported material is different from the liquid borophene created in this study, without the use of any solvents," says Dr. Kambe, while discussing the advantages of BoL-LC over other 2D liquid crystals.

What's more, they found that even upon exposure to direct fire, BoL-LC was noncombustible! This confirms that BoL-LC in a liquid state with an ordered layer structure can exist over a wide range of temperatures – a property which has not been observed so far for other organic materials.

When asked about the implications of these findings, Dr. Kambe and Dr. Yamamoto stated, "BoL-LC exhibits strong potential for use in widespread applications, that are unavailable to conventional organic liquid crystals or inorganic materials."

Indeed, borophene liquid crystals are stacked with several advantages and may expedite important developments in the optoelectronics and photonics industry in the future!

1 Laboratory for Chemistry and Life Science, Tokyo Institute of Technology