A new organic peroxide molecule, BMPF, prepared by scientists at Tokyo Institute of Technology (Tokyo Tech), releases fluorescence under mechanical stress and could be incorporated into polymer networks for mechanofunctional design. BMPF-linked polymers are also stable at relatively high temperatures and could pave the way for highly selective and efficient small-molecule-releasing systems with applications in imaging and drug delivery. 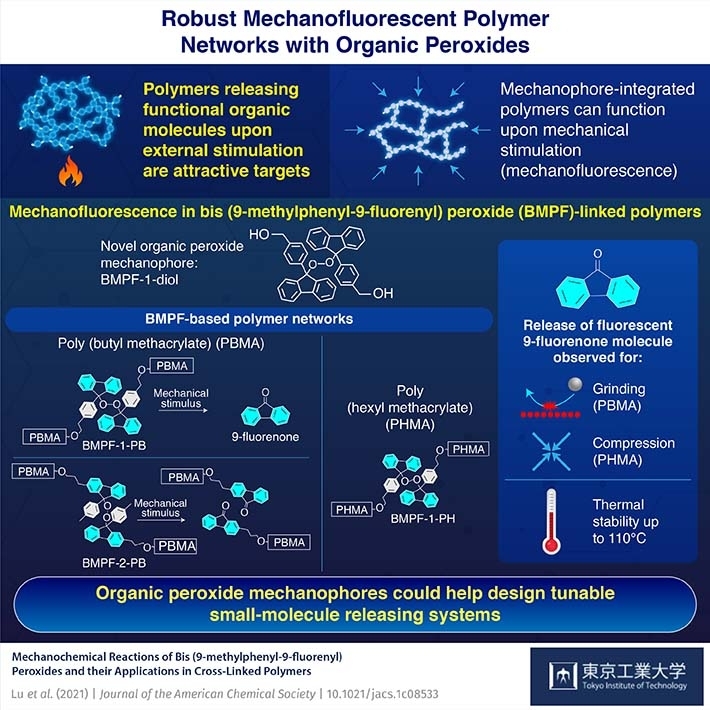 Polymers make-up everything from the clothes we wear to the plastic we eat off. In recent years, polymers that can release small molecules (like drugs) have been of major interest to pharmaceutical researchers. Previous studies have demonstrated that polymer systems can be modified to release fluorescent molecules when exposed to heat, light, or a change in pH. Now, researchers in the field have focused on "mechanophores," materials that undergo a chemical transformation when placed under mechanical stress.

, researchers from Japan have demonstrated the synthesis of a novel organic peroxide mechanophore, bis (9-methylphenyl-9-fluorenyl) peroxide (BMPF), which can be incorporated into a polymer network to release fluorescence. "While there has been little documented research on mechanophores based on organic peroxides so far, our results indicate that BMPF could have excellent potential for application in designing stress-responsive materials," says Professor Hideyuki Otsuka of Tokyo Tech, who led the study.

Peroxides occur naturally in the human body as the result of the chemical reactions that take place within it, signifying their important role in new chemical processes. Inspired by this, the team synthesized a "peroxide linker" that could easily dissociate into smaller molecules under mechanical stress. They then ground the compound, BMPF, and observed that the solid not only changed color but also released 9-fluorenone, a fluorescent molecule. They then introduced BMPF into a polymer network and found that it retained its ability to release 9-fluorenone. Moreover, the fluorescence could be induced by either grinding or compression. Additionally, they tested the thermal stability of BMPF cross-linked polymers and found that they could withstand temperatures up to 110°C without decomposition.

The team is excited by these findings and their potential to expand the field of peroxide mechanochemistry. "By modifying the current system, we should be able to create other mechanofunctional polymers that can be tuned to release small molecules with special function when exposed to specific stimuli, toward wide-ranging applications in the fields of stress-sensing, imaging, and drug delivery," comments Prof. Otsuka.

Some interesting consequences to look forward to!