Taking a Shine to Polymers: Fluorescent Molecule Betrays the Breakdown of Polymer Materials

Scientists at the Tokyo Institute of Technology (Tokyo Tech) have come up with a simple method to evaluate the strength and performance of polymer materials. They present their innovation in the latest issue of Angewandte Chemie International Edition, and hope that their work will enable scientists and engineers to better evaluate the polymers they work with, and eventually synthesize better ones.

Nylon, rubber, silicone, Teflon, PVC – these are all examples of man-made polymers – long chains of repeated molecular units that we call monomers. While polymers also exist in nature (think wool, silk, or even hair), the invention of synthetic polymers, the most famous of which is plastic, revolutionized the industry. Light, stretchy, flexible, yet strong and resistant, synthetic polymers are one of the most versatile materials on the planet, used in everything from clothing to building, packaging and energy production. Since the very beginning of this new era in material engineering, understanding the influence of external forces on polymers' strength and stability has been crucial to evaluate their performance.

When subjected to mechanical stress, the weak bonds that keep some polymer chains together are overcome, and one inevitably breaks. When this happens, a free radical (a molecule with an unpaired electron, which is naturally unstable and very reactive, called a "mechanoradical" in this case) is generated. By estimating the amount of free mechanoradicals produced, we can infer the resistance of a material to the amount of stress. While this phenomenon is well documented, scientists struggled to observe it under ambient temperature in bulk state, because mechanoradicals produced for polymers in bulk are not stable due to their high reactivity toward oxygen and other agents.

Researchers from Tokyo Institute of Technology led by Professor Hideyuki Otsuka decided to take up the challenge. In their study published in Angewandte Chemie International Edition

, they used a small molecule called diarylacetonitrile (H-DAAN) to capture the rogue free radicals. "Our theory was that H-DAAN would emit a distinctive fluorescent light when it reacts with the free radicals, which we could then measure to estimate the extent of polymer breakdown," explains Prof Otsuka. "The theory is simple; the higher the force exerted on the polymer, the more mechanoradicals are produced, and the more they react with H-DAAN. This higher reaction rate results in more intense fluorescent light, changes in which can easily be measured." 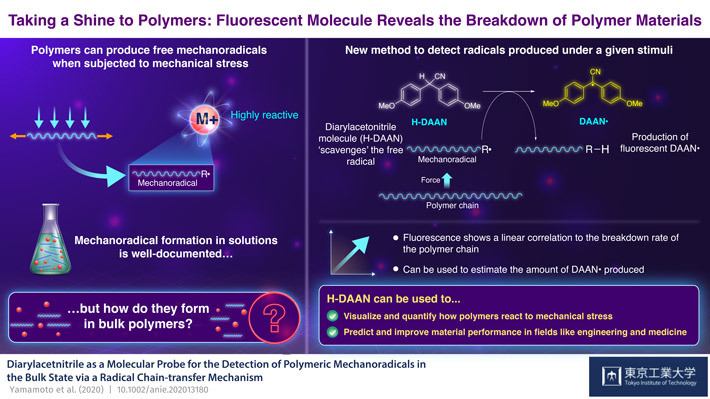 The researchers now wanted to see how this would work in practice. When polystyrene (in the presence of H-DAAN) was subjected to mechanical stress via grinding, the H-DAAN acted as a radical scavenger for polymeric mechanoradicals, and bound with them to produce "DAAN•," which has fluorescent properties. This caused a visible yellow fluorescence to appear.

"More important, probably, is the clear correlation that we found between fluorescence intensity and the amount of DAAN radicals generated by the ground-up polystyrene, as we had predicted," reports Prof Otsuka. "This means that it is possible to estimate the amount of DAAN radicals generated in the bulk system just by measuring the fluorescence intensity."

The implications of their findings are wide-ranging: by being able to visually quantify how materials respond to different external stimuli, they can test how suitable polymers are for various uses, depending on the mechanical stress they will be expected to undergo. This method could prove to be an invaluable tool for scientists and engineers as they strive to improve material performance and specificity.

This exciting research this shine light on the responses of polymers to mechanical stress and illuminate the way forward in the research of polymer mechanoradicals!