Scientists at Tokyo Institute of Technology and Université Grenoble Alpes, CNRS have conducted research in Antarctica to elucidate the chemical pathways that contribute to the formation of atmospheric sulfate and nitrate. They were able to identify seasonal changes in Δ17O values of sulfate and nitrate, and confirm that these are due not to variations in Δ17O values of the precursor ozone but to changes in atmospheric oxidation chemistry.

Oxygen has three stable isotopes (16O, 17O and 18O). Enrichment of 17O relative to the dominant 16O is normally about half of that of 18O for various physicochemical processes, except for ozone (O3) production, which uniquely enriches 17O. This anomalous enrichment of 17O (Δ17O) is inherited by other photochemical oxidants and oxidation products derived from the precursor ozone through various atmospheric oxidative pathways. Thus, the oxygen isotopic compositions of sulfate (SO42-) and nitrate (NO3-) fluctuate seasonally, but the extent to which these seasonal changes are related to changes in isotopic compositions of ozone or to contribution of other photochemical oxidants is unknown. This can only be established by simultaneous measurement of oxygen isotopes in nitrate, sulfate, and ozone from the present-day Antarctic atmosphere. However, there is a paucity of such data, and the complex chemistry is only partly understood.

Because of its role in the life cycle of trace gases, reconstructing the oxidative capacity of the atmosphere is very important in understanding climate change. Triple oxygen isotopic compositions (Δ17O = δ17O - 0.52 × δ18O) of atmospheric sulfate and nitrate in Antarctic ice cores may have potential as atmospheric proxies of atmospheric oxidants because they reflect the oxidative chemical processes of their formation. This new approach may well allow scientists to peer back into the history of chemical reactions in the Antarctic atmosphere.

To address this challenge, Sakiko Ishino, Shohei hattori and colleagues from at Tokyo Institute of Technology and Université Grenoble Alpes, France conducted simultaneous measurement of Δ17O values of atmospheric sulfate, nitrate and ozone collected at Dumont d'Urville, the coastal site in Antarctica. The French team collected aerosol samples weekly over a one-year period, Japan-French collaborative team conducted various analyses of the ionic species and isotopic compositions, and monitoring the movement of air masses over Antarctica. Both sulfate and nitrate oxygen isotopic compositions varied significantly over the course of a year, with minimum values in summer and maximum values in winter. Ozone, however, showed comparatively limited variability. The scientists were able to demonstrate that ozone variations have no significant influence on the seasonal fluctuations of sulfate and nitrate 17O enrichment. Instead, these fluctuations are likely to reflect sunlight-driven changes in the relative importance of different oxidation pathways.

Analysis of aerosols collected from Antarctic inland sites in the future should help identify the processes contributing to the formation of sulfate and nitrate during spring and fall. Extending the analysis to ice cores might aid in the quantitative estimation of changes to the atmospheric oxidation environment on Earth, for example, glacial cycles of the Pleistocene (Ice Age).

This achievement was published in Atmospheric Chemistry and Physics issued by the European Geosciences Union as selected Highlight Articles on March 16, 2017. 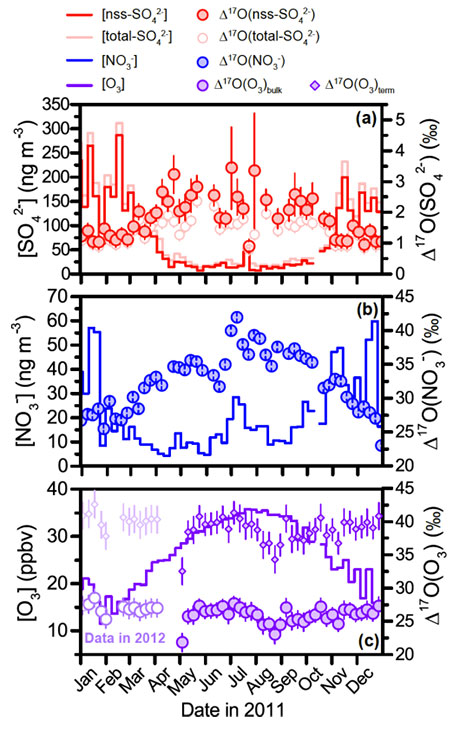 Figure 3. Variation in Δ17O values of atmospheric nitrate, sulfate, and ozone over Antarctica.