Elongation, a crucial step in the translation process of protein synthesis, gets disrupted by amino acid sequences with an abundance of N-terminal aspartic and glutamic acid residues in eukaryotic cells, discovered researchers from Tokyo Tech and University of Hyogo. The team's findings show that these "risky" amino acids can destabilize the ribosomal machinery. As a consequence, most proteomes tend to avoid incorporating them at the N-terminals of peptide sequences, indicating a bias in amino acid distribution. 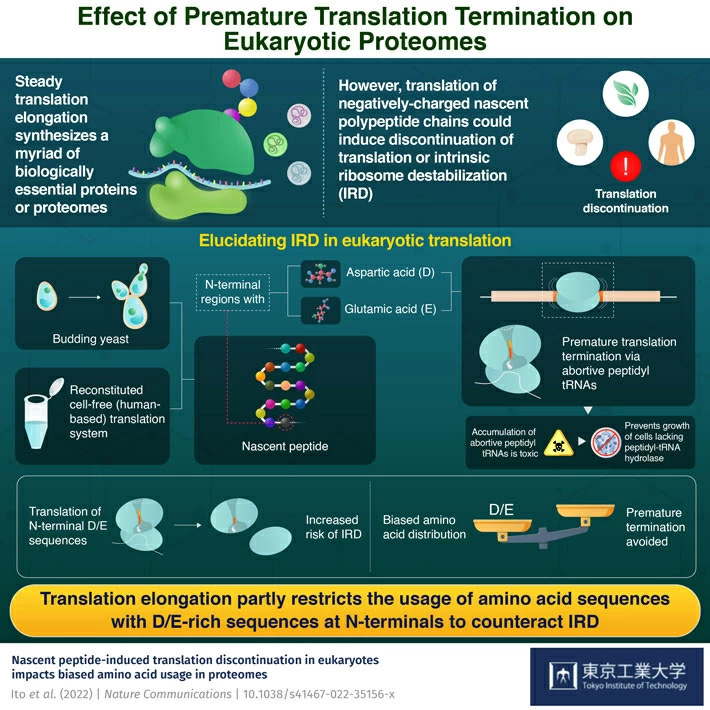 Life depends on the precise functioning of several proteins synthesized in cells by ribosomes. This diverse set of proteins, known as a proteome, is maintained by the robust translation elongation of amino acid sequences taking place in the ribosomes. The translation mechanisms which ensure that nascent chains of polypeptides—long chains of amino acids—are elongated without getting detached are conserved in all living organisms. However, the rates of elongation are not constant. Elongation is often interrupted by interactions between positively charged nascent polypeptides and negatively charged ribosomal RNA.

Studies have found that in prokaryotic Escherichia coli cells, the nascent peptide chains not only disrupt the elongation process but destabilize the ribosomes themselves. This type of premature termination of translation is called intrinsic ribosome destabilization (IRD). Evidence shows that IRD was mainly triggered by nascent peptides with N-terminals rich in aspartic and glutamic acid sequences. Since translation mechanisms are conserved, researchers began to wonder if a similar phenomenon could be seen in the cells of eukaryotic organisms, such as plants, fungi, and animals.

Recently, a team of researchers from Japan, led by Prof Hideki Taguchi from Tokyo Institute of Technology (Tokyo Tech), were successful in providing some answers to this question. In their recent study published in Nature Communications

, the team using budding yeast cells and a reconstituted cell-free translation system to investigate the IRD phenomenon in eukaryotes. "Previous studies have explored the impact of aspartic acid and glutamic acid sequences on bacterial ribosomal translation. However, not much is about eukaryotic cells. So, we chose a eukaryotic organism like yeast to investigate the premature termination of translation and if there were any mechanisms present to counter IRD," explains Prof. Taguchi, one of the corresponding authors of the study.

The bioinformatics analysis carried out by the team, however, revealed a unique way yeast cells reduce the risk of IRD. They found that the proteomes had a biased amino acid distribution, where the translation elongation process disfavored the amino acid sequences with D/E runs in their N-terminal region.

This study provides novel insights into the elongation dynamics of eukaryotic cells and the counteracting mechanisms in place to reduce translation defects during protein synthesis. "Understanding the factors that affect overall amino acid usage in proteomes can help us improve the expression of recombinant proteins. This is essential for the production of useful proteins that can have clinical and industrial applications," concludes Prof. Taguchi.