Seawater is known to contain a significant concentration of boric acid, which can be toxic and deadly to living systems. As such, fish living in marine habitats need to be able to excrete boric acid in order to maintain a healthy boron balance. Tokyo Tech researchers have now identified the gene and mechanism of boric acid transport in seawater fish and contrasted it to freshwater species. 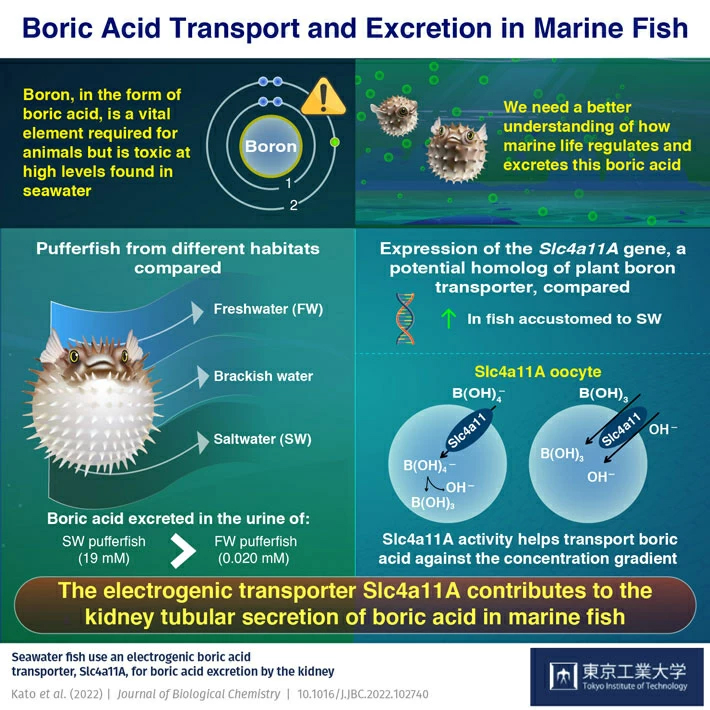 Marine fishes live in highly saline environments with ionic concentrations that are vastly different from their blood plasma. Seawater contains a variety of toxic ion species that can build up in the body if the fish does not excrete them. One example of this is boric acid, which—in small amounts—is a vital micronutrient for animals but can prove toxic in excess. Hence, marine fish must develop physiologic means to excrete boric acid. However, how they do this is, as yet, unknown. Now, an international team led by researchers from Tokyo Institute of Technology (Tokyo Tech) has unveiled and demonstrated the molecular mechanisms underlying boric acid secretion in marine pufferfish.

Associate Professor Akira Kato of Tokyo Tech is the principal author of the study, which was published in the Journal of Biological Chemistry

How did this boric acid enter the kidney tubules, though?
The team found that Takifugu pufferfish expressed an uncharacterized gene, Slc4a11A, in their kidney tubules. This gene encodes a protein homologous to BOR1, which is a boric acid transporter found in plants.
A detailed electrophysiological analyses of the pufferfish Slc4a11A function revealed that Slc4a11A functions as an active or electrogenic boric acid transporter," further discusses Dr. Kato.

This basically means Slc4a11A can transport boric acid against a concentration gradient, and its function is independent of other ions like sodium. This is particularly important as it is the first report of active boric acid transport mechanism in an animal species.

Mammals have the Slc4a11 gene as well, leading to questions whether they could also be able to function like this. While we know that mammalian Slc4a11 does not transport boric acid, human mutations in the Slc4a11 gene cause visual impairments like congenital hereditary endothelial corneal dystrophy and Fuchs' endothelial corneal dystrophy. Further research into the activities of Slc4a11 in different vertebrate species will reveal whether mammalian Slc4a11 lost its boric acid transport activity with evolution, or seawater fish Slc4a11A acquired it as they evolved.

In any case, this resounding work opens new pathways towards understanding boric acid transport in animals and unlocking the mysteries that genetics has in store.