In a leap forward for diabetes research, Tokyo Tech researchers reveal that the feel-good hormone, dopamine, regulates insulin secretion through a heteromeric complex of receptors, thereby providing new targets for antidiabetic medication and therapy. The study is the first to elucidate the mechanism behind dopamine's down-regulation of insulin secretion. 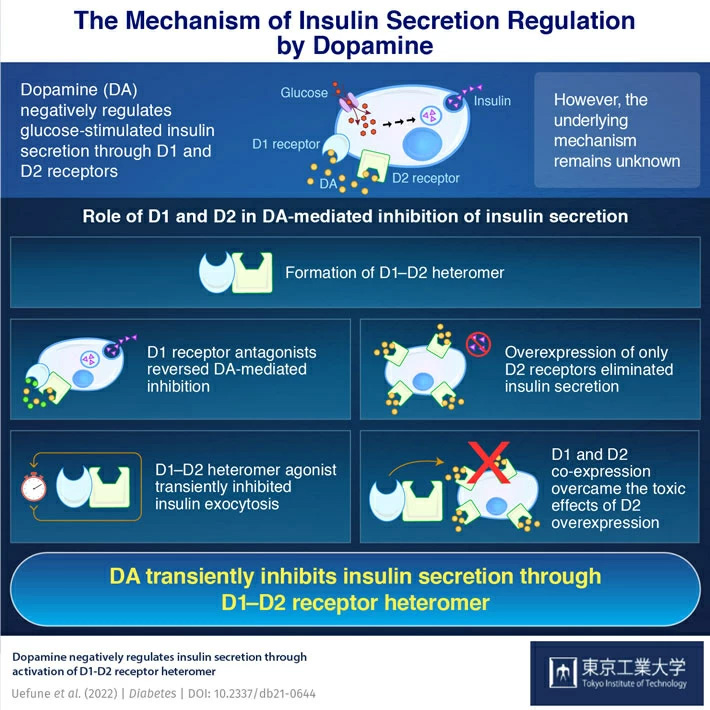 Diabetes is a lifelong, chronic health condition caused by abnormalities in the body's production and use of the hormone insulin. Research has shown that the feel-good hormone, dopamine (DA), plays a key role in how the body regulates the production of insulin. Typically, insulin is secreted by cells in the pancreas called 'beta-cells,' in response to glucose—a process that is aptly called 'glucose-stimulated insulin secretion (GSIS). DA negatively regulates GSIS, leading to transient changes in the body's levels of insulins. But the mechanism behind this regulation was unknown, until now.

Recently, a team led by researchers from Tokyo Institute of Technology (Tokyo Tech) uncovered the precise mechanism through which DA regulates insulin secretions. Using a technique called "total internal reflection fluorescence microscopy," they were able to reveal that DA "receptors"—proteins on cells that DA can bind to—called D1 and D2, act in concert to achieve the transient regulation of insulin.

"We found that D1 receptor antagonists—drugs that block D1 receptors from activation—decreased the dopamine-mediated inhibition of insulin secretion. We also saw that overexpression of only D2 receptors on beta cells exerted an inhibitory and toxic effect and abolished insulin secretion in beta-cells. This gave us a clue to the mechanism of down-regulation," explains Prof. Shoen Kume of Tokyo Tech, who led the study.

The research team then performed further experiments called "proximity ligation" and "Western blot assays" to study the receptors further. They found that D1 and D2 bound to each other to form a complex called a "heteromer." When activated by DA, this heteromer transiently inhibited insulin secretion. They also saw that when D1 and D2 were co-expressed on beta-cells, the cells were able to bypass the toxic effects of D2 overexpression.

Dr. Kume says, "From these findings it can be concluded that D1 modulates D2 signaling to protect beta-cells from the harmful effects of DA. This study greatly improves our understanding of DA signaling in diabetes."

Understanding the mechanism of DA signaling in the regulation of insulin secretion is sure to provide new therapeutic targets for the prevention, treatment, and management of diabetes.