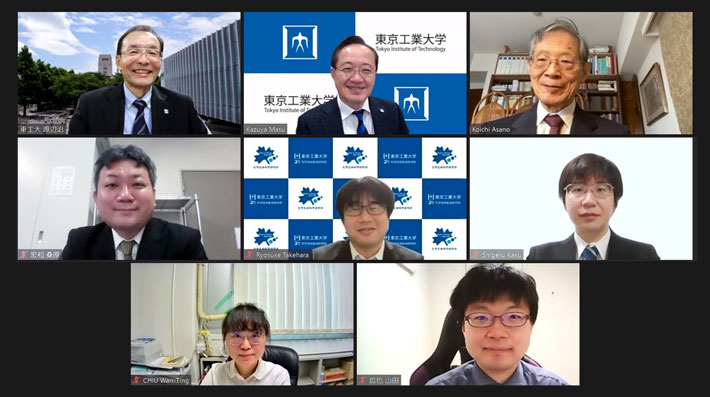 Ionic conductors, solid with ion conductivity, are essential materials used in various applications such as batteries and chemical sensors. Higher ion conductivities are reported when the size of ionic conductors is small at the nanometer level (Nanoionics phenomenon). The spatial conditions and mechanism of the fast ion conduction shown in the nanoscale remain unexplained.

In this study, we applied single-crystal nanosheets of zirconia (ZrO2), which is an oxygen ion conductor, to clarify the mechanism of fast ion conduction. The advantages of using nanosheets with a two-dimensional structure are that nanosheets are easily deposited on a substrate, and their conductivity is measure by nanoprobes. In addition, the relationship between nano-space and ionic conduction can be explored by changing the size of the nanosheets.

Shape deformation and internal degree of freedom of the ferromagnetic shape memory alloy (FSMA) are manipulatable via magnetic field. Hence, FSMA is considered as a potential material for the high–speed actuators in robots and magnetic cooling applications. NiMnGa alloy is a promising FSMA; however, its high brittleness impedes the practicability. Therefore, in this study, the separators (i.e. S or Bi) were introduced into the polycrystalline NiMnGa alloy intentionally to separate the grains and make the alloy even brittle. The polycrystalline NiMnGa is thereafter mechanically crushed into single crystal powders at elevated temperature. The conventional difficulties such as high defect concentration and complicated procedures for single crystal preparation could be solved by the facile mechanical crushing. The NiMnGa single crystal powders are then utilized for the fabrications of the composites for realizing the high–speed actuators for robots and magnetic cooling applications.