In a Supramolecular Realm: Advances in Intracellular Spaces with De Novo Designed Peptide

Scientists at Tokyo Institute of Technology (Tokyo Tech) have set out to harness the potential of self-assembling peptides (SAPs) in intracellular spaces. They present a de novo designed peptide, Y15, which displays a strong tendency to assemble in cellular environments. The addition of Y15-tagged bioactive proteins can functionalize these assemblies, enhancing their utility and relevance by leaps and bounds.

Over the last two decades, biomaterials research has made significant progress, transitioning from traditional biomaterials to biomaterials with controlled structure and dynamic functionality. A number of building blocks have been explored for developing biomaterials by self-assembly, but SAPs have garnered special attention due to their tunability and potential use in various applications such as tissue engineering, wound healing, and vaccinations. Despite these benefits, the SAP-based approach is less explored in the intracellular context.

Fortunately, a team of scientists from the Tokyo Institute of Technology (Tokyo Tech), led by Assistant Prof. Takayuki Miki, have reported a de novo peptide, Y15, that readily forms secondary structures to enable bottom-up synthesis of functional protein assemblies in live cells. Their findings are published in Nature Communications

. Assistant Prof. Miki explains, "The cell environment is a dense milieu in which macromolecules occupy a considerable volume; developing SAPs that interact in such a crude setting is difficult. Thankfully, we were able to create a de novo peptide—that is, from scratch—which shows a high propensity to assemble in intracellular spaces."

The scientists realized that Y15 could be a key motif in the formation of protein assemblies in a liquid solution. To evaluate the assembly mechanism, Y15 was genetically tagged with a model protein, superfolder green fluorescence protein (sfGFP). They discovered that it could form fibrous structures in test tubes. Furthermore, when Y15-sfGFPs were expressed in live cells, they retained their self-assembling affinity by forming clusters. Several tests corroborated the clustering of Y15-sfGFP in live cells, confirming that these peptides can facilitate protein assembly.

The researchers were also able to build artificial microscale structures by fusing Y15 to Azami-Green, a tetrameric fluorescent protein. Thus, Y15-based assemblies could be adorned with functional proteins as well. Further, the researchers reconstructed Nck (an adaptor protein) clusters by incorporating Y15-tagged Nck into Y15-based supramolecules. This resulted in N-WASP (neural Wiskott-Aldrich syndrome protein)-mediated actin polymerization, which in turn plays an integral role in cell locomotion. The Y15-based assembly helped in evaluating the impact of Nck domain valency and density-dependency, hence serving as a platform for in-cell reconstitution studies.

The Y15 SAPs are much smaller than previously reported protein-based tags. Likewise, the use of an SAP-based system is sensible and straightforward, and it can be genetically tagged to optimize functioning. Assistant Prof. Miki concludes, "We believe that SAPs will set the stage for a range of applications, such as cluster formation with stimuli responsiveness, artificial constitution of phase separations, reconstitution of natural protein complexes, and many more. We hope that this rational engineering of supramolecular assembly will pave the way for future intracellular research."

We sure have our fingers crossed! 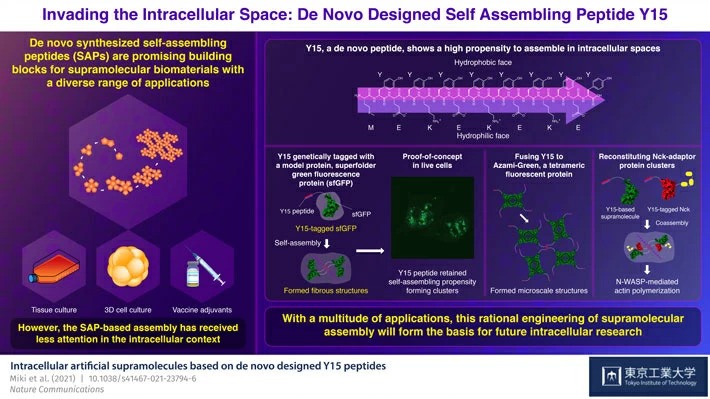