Researchers at Tokyo Tech have succeeded in constructing protein nanotubes from tiny scaffolds made by cross-linking of engineered protein crystals. The achievement could accelerate the development of artificial enzymes, nano-sized carriers and delivery systems for a host of biomedical and biotechnological applications. 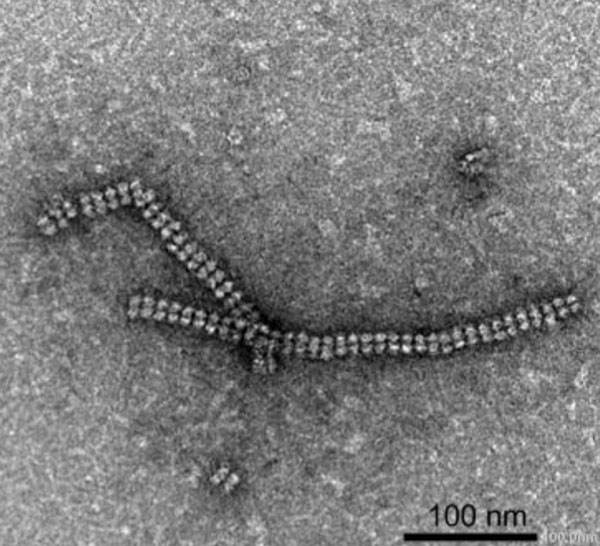 An innovative way for assembly of proteins into well-ordered nanotubes has been developed by a group led by Takafumi Ueno at Tokyo Tech's Department of Biomolecular Engineering (See Figure 1).

Tailor-made protein nanostructures are of intense research interest, as they could be used to develop highly specific and powerful catalysts, targeted drug and vaccine delivery systems, and for the design of many other promising biomaterials.

Scientists have faced challenges in constructing protein assemblies in aqueous solution due to the disorganized ways in which proteins interact freely under varying conditions such as pH and temperature.

The new method, reported in the journal Chemical Science, overcomes these problems by using protein crystals, which serve as a promising scaffold for proteins to self-assemble into desired structures. The method has four steps, as illustrated in Figure 2: 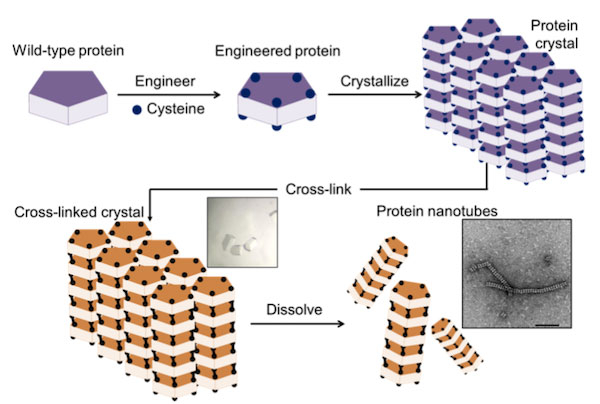 The method involved a four-step process: 1) introduction of cysteine residues into the wild-type protein; 2) crystallization of the engineered protein into a lattice structure; 3) formation of a cross-linked crystal; and 4) dissolution of the scaffold to release the protein nanotubes.

The crystal system, composed of the ordered arrangement of assembled structures, makes it easy to control precise chemical interactions of interest by cross-linking to stabilize the assembly structure — an accomplishment that cannot be achieved from cross-linking of proteins in solution.

The researchers chose a naturally occurring protein called RubisCO as a building block for construction of nanotube. Due to its high stability, RubisCO could keep its shape, and its crystal structure from previous research had recommended it for this study.

The study also demonstrated that the protein nanotubes could retain their enzymatic ability.

"Our cross-linking method can facilitate the formation of the crystal scaffold efficiently at the desired position (specific cysteine sites) within each tubes of the crystal," says Ueno. "At present, since more than 100,000 protein crystal structures have been deposited in Protein data bank

, our method can be applied to other protein crystals for construction of supramolecular protein assemblies, such as cages, tubes, sheets."

The nanotube in this study can be utilized for various applications. The tube provides the environment for accumulation of the exogenous molecules which can be used as platforms of delivery in pharmaceutical related fields. The tube can also be potential for catalysis because the protein building block has the enzymatic activity in nature.