Scientists find a "switch" to increase starch accumulation in algae

A brighter future for renewable energy and materials

Results from a collaborative study by Tokyo Tech and Tohoku University, Japan, raise prospects for large-scale production of algae-derived starch, a valuable bioresource for biofuels and other renewable materials. Such bio-based products have the potential to replace fossil fuels and contribute to the development of sustainable systems and societies. 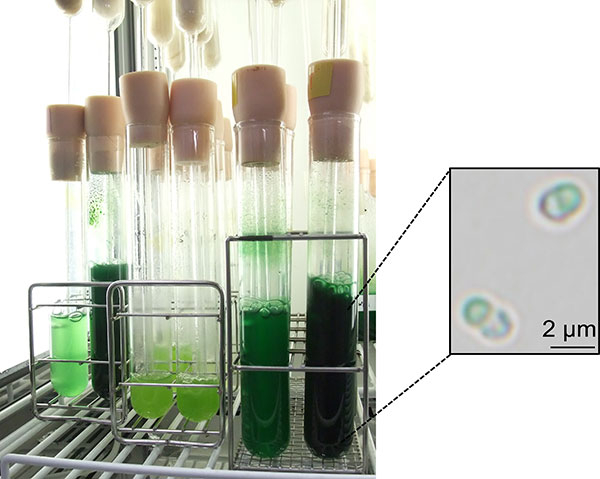 Figure 1. Cultivation of the unicellular red alga C. merolae in the laboratory

A "switch" controlling the level of starch content in algae has been discovered by a research team led by Sousuke Imamura at the Laboratory for Chemistry and Life Science, Institute of Innovative Research, Tokyo Tech.

Reported in The Plant Journal, the study focused on the unicellular red alga Cyanidioschyzon merolae pictured in Figure 1. The researchers demonstrated that starch content could be dramatically increased in C. merolae through inactivation of TOR (target of rapamycin), a protein kinase1 known to play an important role in cell growth.

They observed a notable increase in the level of starch 12 hours after inactivation of TOR through exposure to rapamycin, and this led to a remarkable ten-fold increase after 48 hours (see Figure 2). 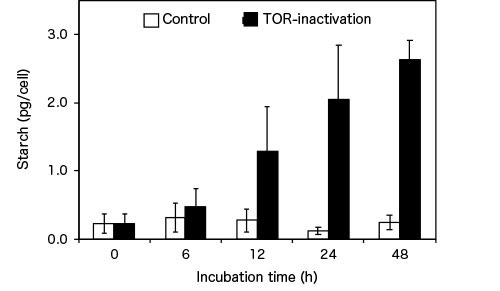 Compared with the control, inactivation of TOR resulted in an approximately ten-fold increase in starch content in C. merolae after 48 hours.

Importantly, the study details a mechanism underlying this profound increase in starch content. Using a method called liquid chromatography-tandem mass spectrometry (LC-MS/MS), the researchers examined subtle changes in the structure of more than 50 proteins that might be involved in "switching on" the process of starch accumulation. As a result, they pinpointed GLG1 as a key protein of interest. GLG1 acts in a similar way to glycogenin, an enzyme found in yeast and animal cells, which is known to be involved in the initiation of starch (or glycogen) synthesis.

The mechanism, summarized in Figure 3, will be of immense interest to a wide range of industries seeking to scale up biofuel and value-added biochemicals production. 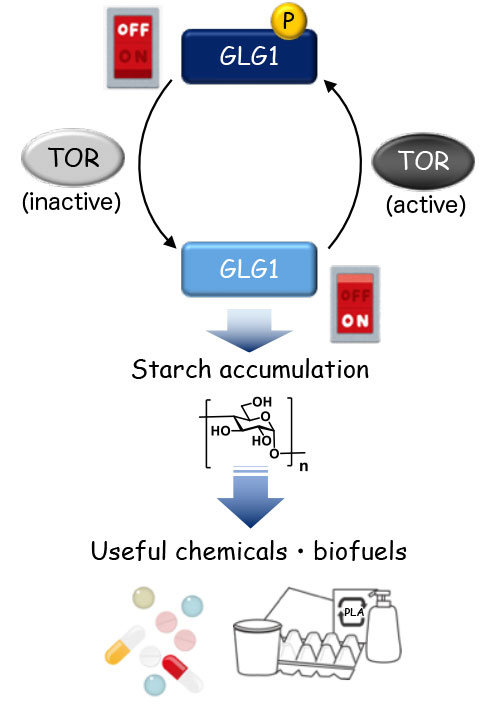 The phosphorylation status of GLG1, which is regulated by TOR signaling, determines the ON/OFF switch for starch accumulation in the cells. Starch is a good carbon resource for chemicals that are applied in a wide range of industries. ("P" denotes phosphorylation.)

For example, the findings could accelerate the production of environmentally friendly fuel additives, pharmaceuticals, cosmetics, and bioplastics2 that are now in high demand with the phasing out of single-use plastic bags and straws in many parts of the world.

Algae, compared with land plants, are very appealing due to their high photosynthetic productivity and relative ease of cultivation. Starch, triacylglycerols (TAGs) and other algal biomass constituents are increasingly viewed as a promising and powerful way to contribute to the Sustainable Development Goals (SDGs) outlined by the United Nations.

The research team notes that more studies using other algal species, as well as higher plants such as Arabidopsis thaliana, could yield further information about the fundamental molecular mechanisms behind starch accumulation. "This information will help to develop technologies to improve starch biosynthesis productivity and concomitantly improve sustainable biomass and bioenergy production," Imamura says.

A type of enzyme that changes other proteins through the addition of phosphate groups (phosphorylation).

Plastics that are made from renewable biomass sources.