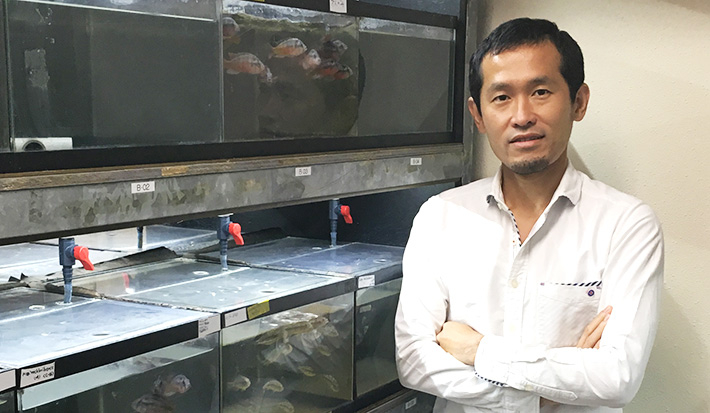 Scientists at Tokyo Tech have discovered a gene that appears to play a vital role in pheromone sensing. The gene is conserved across fish and mammals and over 400 million years of vertebrate evolution, indicating that the pheromone sensing system is much more ancient than previously believed. This discovery opens new avenues of research into the origin, evolution, and function of pheromone signaling. 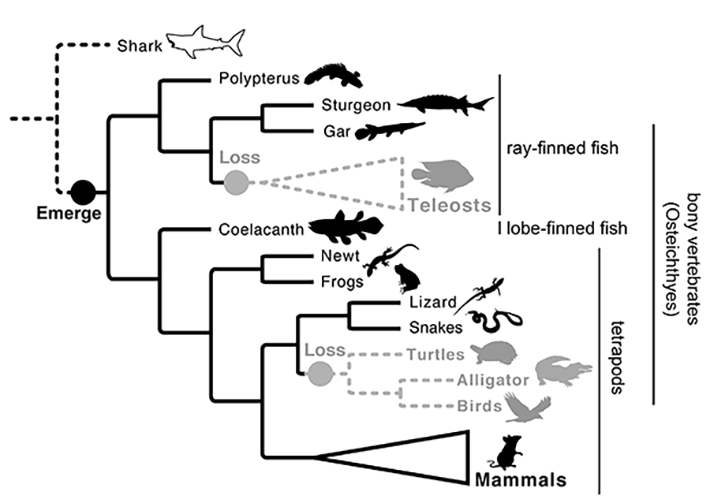 (A) ancV1R emerged in the common ancestor of bony vertebrates (black circle) and was lost in each of the common ancestors (gray circles) of teleost fish and of turtles, alligators, and birds (gray dashed lines and silhouettes). White silhouette and dashed black lines associated with shark indicate that ancV1R has not yet emerged.

(B) Examples of ancV1R loss events in higher primates (left) and cetaceans (right). The gray branches indicate the lineages in which ancV1R has been lost and the vomeronasal organ is absent. The timing of the mutations causing loss of ancV1R is shown above or below the gray circles. 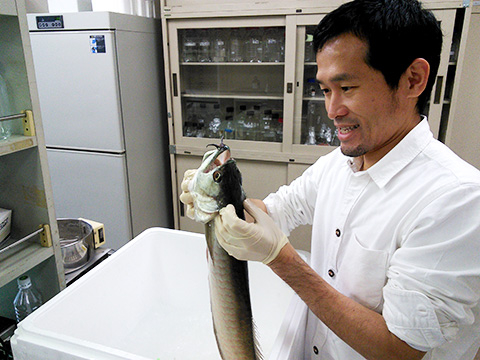 Most land-dwelling vertebrates have both an olfactory organ that detects odors and a vomeronasal organ that detects pheromones, which elicit social and sexual behaviors. It has traditionally been believed that the vomeronasal organ evolved when vertebrates transitioned from living in water to living on land. New research by Masato Nikaido and colleagues at Tokyo Tech, however, suggests that this organ may be much older than previously believed.

The vomeronasal organ contains receptors in the V1R protein family that are crucial for pheromone detection. Nikaido et al. identified a gene, ancV1R, that encodes a previously unknown member of the V1R family. However, unlike other V1R genes, ancV1R is present not only in land-dwelling vertebrates but also in some fish lineages, indicating that it has been conserved over 400 million years of vertebrate evolution. According to Nikaido, this finding was “quite surprising, as this represents the first discovery of a V1R family gene shared between fish and mammals.”

The authors identified ancV1R in 56 of 115 vertebrate genomes. Interestingly, the loss of ancV1R in some vertebrate lineages, such as higher primates (including humans, chimpanzees, and gorillas), cetaceans (including whales and dolphins), birds, and crocodiles, corresponds with the loss of the vomeronasal organ in these lineages (Fig. 1). The findings suggest not only that ancV1R may be a vital component of the vomeronasal organ, but also that this organ predates the transition of vertebrates to land, opening a new avenue of research into its origin.

Examined frozen sections of the vomeronasal organ in diverse vertebrate by in situ hybridization, a signal indicating the gene expression of ancV1R was obtained.

ancV1R is also unusual in that it is expressed in most vomeronasal sensory neurons. In contrast, other V1R proteins follow a “one neuron–one receptor” rule, with only a single receptor being expressed in each neuron. This further demonstrates the importance of ancV1R in pheromone sensing. As noted by Nikaido, “It will be fascinating to further investigate how these patterns of expression are regulated and to determine their functional role in chemosensory signaling.”