How do plants rest photosynthetic activity at night?

Photosynthesis, the process by which plants generate food, is a powerful piece of molecular machinery that needs sunlight to run (Figure 1). The proteins involved in photosynthesis need to be 'on' when they have the sunlight they need to function, but need to idle, like the engine of a car at a traffic light, in the dark, when photosynthesis is not possible. They do this by a process called 'redox regulation'–the activation and deactivation of proteins via changes in their redox (reduction/oxidation) states. What happens in light is well understood: the ferredoxin-thioredoxin reductase (FTR)/thioredoxin (Trx) pathway is responsible for the reduction process, which activates the photosynthetic pathway. However, scientists have long been in the dark about what happens when light is not available, and how plants reset photosynthetic proteins to be ready to function when light is resumed.

Figure 1. Epidermal cells of Arabidopsis leaves and schematic of chloroplasts

Arabidopsis leaves (left), Epidermal cells (center, bar=20 μm) and schematic of chloroplasts (right). Chloroplasts, size from 3 to 10 μm, photosynthetic cell organelles in green leaves, capture light energy and use it to produce energy-rich molecules and to generate oxygen. They split water and use the electrons from these molecules on the process.

Now, Keisuke Yoshida, Toru Hisabori and colleagues have identified two proteins, constituting the thioredoxin-like2 (TrxL2)/2-Cys peroxiredoxin (2CP) redox cascade, that help control the reoxidation of these photosynthetic proteins by modifying key parts of the molecular players. These two proteins appear to function as part of a cascade that siphons energy from the photosynthetic proteins to the always energy-hungry hydrogen peroxide (Figure 2). TrxL2, unlike similar, better-known proteins, seems to be specialized for the 'switching off' process; it's an efficient oxidizer of many proteins, but only reduces 2CP, allowing the energy drained by TrxL2 from several upstream reactions to pass to 2CP and thence hydrogen peroxide. This cascade thus keeps photosynthesis on standby until light is available again. 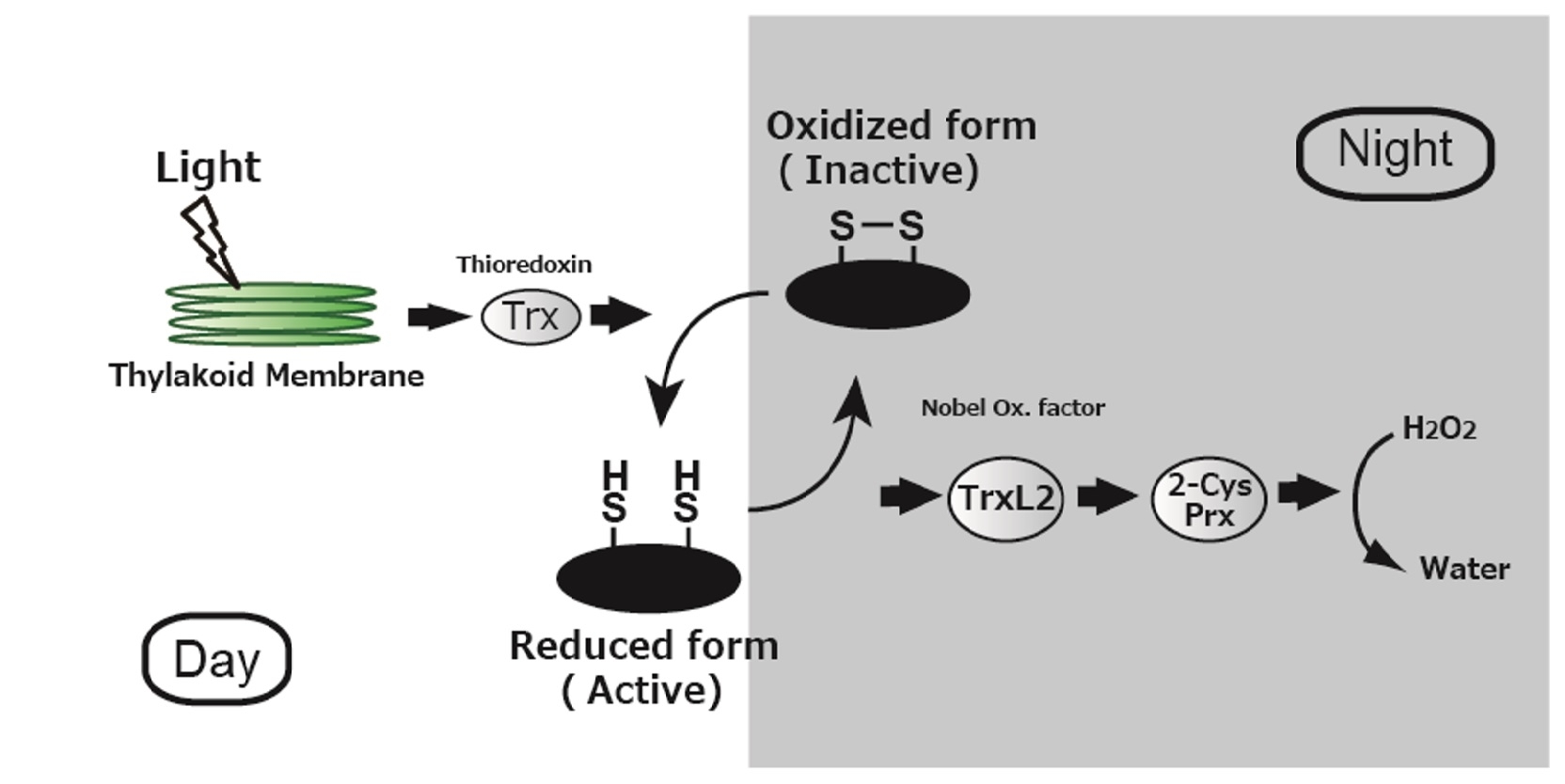 Reduction/oxidation reactions in plants that control the activity of photosynthetic proteins when light is present (unshaded) and when it is absent (shaded). Unlike the well-known reactions that occur in the light, the mechanism of regulation in the dark was poorly understood. This study demonstrates that energy is funneled from the proteins to TrxL2 to 2CP and finally to hydrogen peroxide, keeping photosynthesis on standby until light is available again.

TrxL2/2CP do work in light as well, but are overshadowed by the normal activation machinery in plants and only take center stage in the absence of light. Interestingly, this cascade does not seem to affect photosynthesis itself, as mutant plants without 2CP behave normally in light; however, the ‘switching off' mechanism is significantly less efficient in these mutant plants than in wild-type plants. Moreover, the fact that this process is less efficient, rather than absent altogether, suggests that other, as yet unknown, proteins serve similar functions in plants. These researchers thus shed light on how plants reserve the activity of photosynthetic proteins for when it's actually useful.