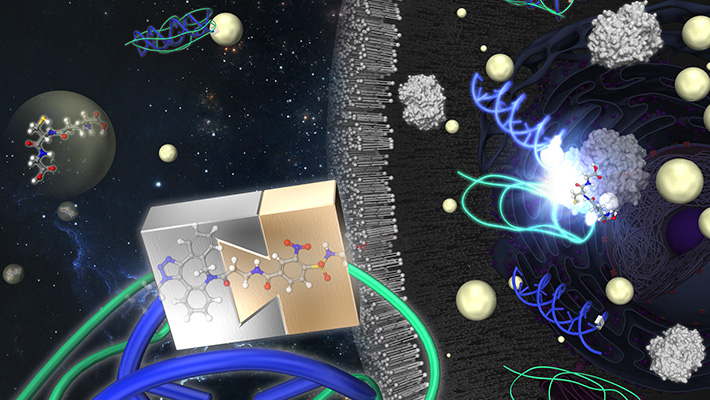 siRNA (small interfering RNA) is a double-stranded RNA composed of 20-22 base pairs. siRNA cleaves mRNA (messenger RNA) in the cell in a sequence-specific manner, leading to gene silencing with high selectivity [1]. Thus, siRNA is considered as a potent medicine due to the superior selectivity to the target, without a severe adverse effect.

Chemical modification of siRNA ameliorates its potency as a medicine; for example, facilitated internalization in the pathological lesion [2] and enhanced stability against enzymatic degradation in blood stream [3] have been addressed. Among them, conjugation with a functional polymer endows siRNA with multiple functionalities, because of easiness in functionalization of a polymer [4]. However, large volume of the conjugated polymer often inhibits siRNA recruitment into gene silencing pathway [5]. In general, siRNA forms RISC (RNA-induced silencing complex) with intracellular proteins, directed toward cleavage of mRNA with the complementary sequence; in this regard, the steric hindrance effect of the vicinal polymer hindered siRNA interaction with the RISC-related proteins, resulting in compromised gene silencing efficacy. Thus, an appropriate chemical linker that separates siRNA and the conjugated polymer selectively in the cell is often required.

Figure 1. Illustration of polymer-conjugated siRNA having 2-nitrobenzenesulfonamide group as a chemical linker

Figure 2. Cleavage ratio of the chemical linkers in response to reductive conditions 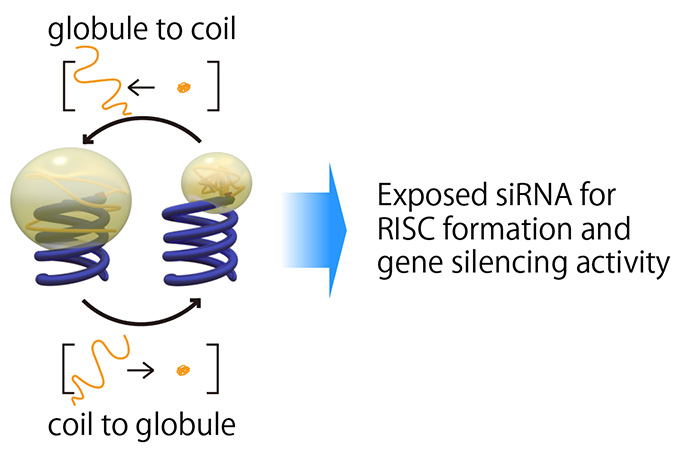 Figure 3. Coil-globule transition of the conjugated polymer for control of siRNA bioactivity 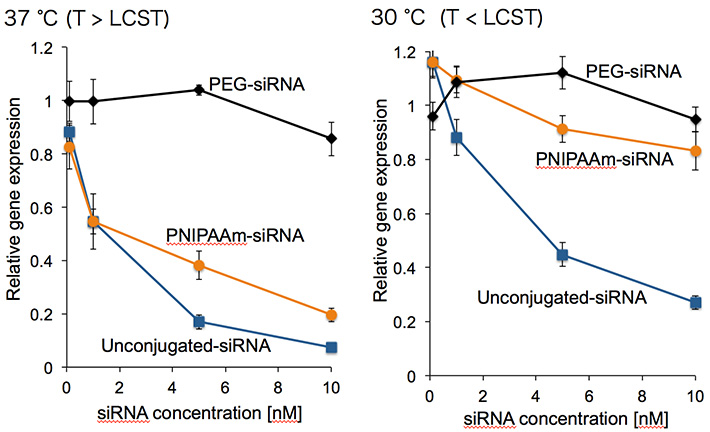 Meanwhile, steric hindrance effect of the conjugated polymer triggered our interest in developing a new methodology for a control of siRNA bioactivity in the cell; in situ regulation of the volume of the conjugated polymer allows controlled siRNA recruitment into gene silencing pathway, toward the localized therapy without undesired toxicity at normal tissues. In order to realize the artificial control of gene silencing activity, poly(N-isoproprylacrylamide) (PNIPAAm) was selected for conjugation with siRNA (Figure 3). PNIPAAm behaves as a coil form below LCST (lower critical solution temperature) of 33 ℃, whereas shrinks into a globule form above LCST. This coil-globule transition associates with the considerable volume change and potentially leads to thermosensitive exposure of siRNA to Ago2 (Argonaute2), which plays a prime role in RISC formation. In fact, the synthesized PNIPAAm-siRNA exhibited compromised interaction with Ago2 below LCST (30 ℃) and decreased gene silencing efficacy, whereas PNIPAAm-siRNA induced potent gene silencing efficacy above LCST (37 ℃), which was close to the efficacy of unconjugated siRNA, based on the effective interaction with Ago2 (Figure 4). PEG-siRNA that does not show coil-globule transition in the aforementioned conditions did not induce gene silencing efficacy nor effective interaction with Ago2, confirming that coil-globule transition of the conjugated PNIPAAm is essential for the control of gene silencing activity of siRNA. As described, control of the steric hindrance of the vicinal polymer regulates the siRNA bioactivity, and this methodology would be translated into pathological lesions-specific induction of gene silencing effect, when the responsiveness to the targeted site-specific stimuli (e.g., pH and enzyme) is introduced into the conjugated polymer [7].