Professor Nishiyama, who teaches Human Centered Science and Biomedical Engineering, School of Life Science and Technology, Tokyo Tech, and coworkers at Tokyo Tech, the Innovation Center of Nanomedicine (iCONM), and the Japan Agency for Quantum and Radiological Science and Technology have developed a nanomachine contrast agent[1] which allows for a highly sensitive visualization of "hypoxic regions within the tumor"[2] using MRI. Such regions inside a tumor, even a microscopic environment, are malignant and resistant to treatment. The delivery of enough medicine to hypoxic regions inside a tumor is difficult and effects of radiotherapy are low. Since such regions show resistance to treatment, they are considered to be the regions which advance into more malignant forms of cancer and cause metastasis. The developed nanomachine contrast agent detects the microscopic environment of cancer tissue and has a previously unknown feature of amplifying MRI signal strength. The research team has shown that it makes possible tumor-specific imaging superior to existing MRI contrast agents. By using this nanomachine contrast agent, the team has also succeeded in using its high sensitivity to detect a small colorectal cancer only 1.5 mm in diameter which had metastasized to the liver. As described, the nanomachine contrast agent is minimally invasive compared to biopsy widely used in clinical settings. It is expected to be practically applied as "technology of pathological diagnosis by imaging" to many organs and tissues of the body. The nanomachine contrast agent can also be applied in treatment, for predicting the effects before treatment, or for a prompt effect evaluation afterward. In the future, it is expected to make possible reliable diagnoses that do not miss cancers and proactive treatment which is more reliable. 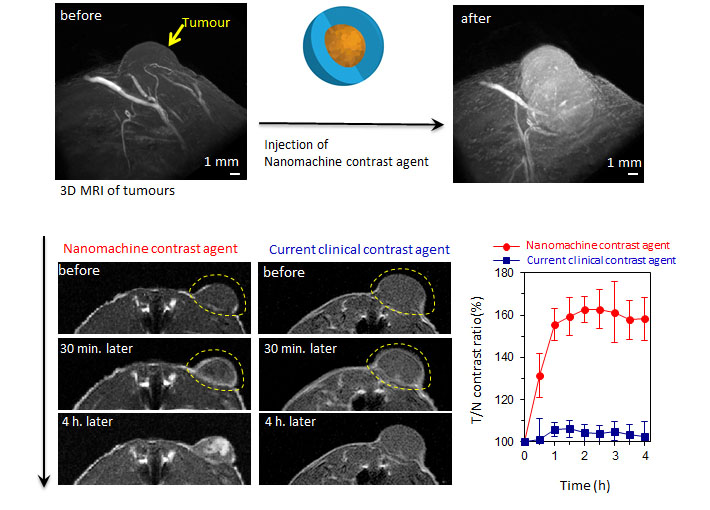 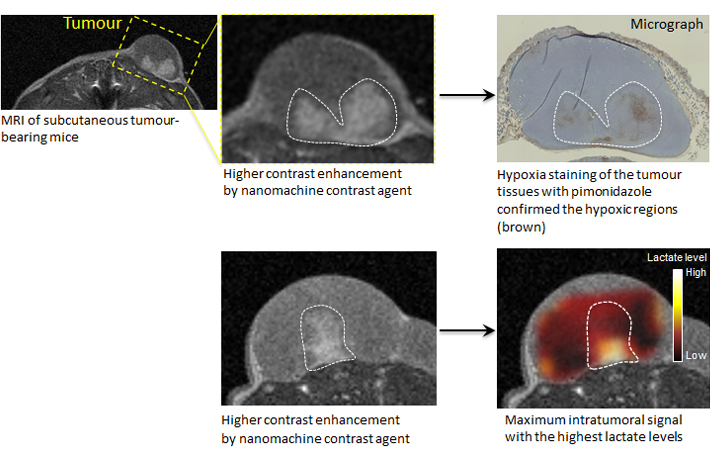 Figure 2. The nanomachine contrast agent may not only detect cancer with an MRI but also be effective in diagnosing its internal structure and malignancy. The nanomachine contrast agent produced stronger signals and made white the regions of low oxygen concentration and low pH levels thought to be especially malignant, even among cancer tissue. This effect was stronger in low-cost MRIs using lower magnetic fields. This means that MRI equipment existing at clinical sites can be used, and this new technology is expected to aid in diagnosing the degree of malignancy of cancers and their resistance to treatment.

Figure 3. The nanomachine contrast agent produced a weaker signal in normal liver and a strong one in liver cancer, producing an extremely strong contrast. This enabled the detection of a small 1.5 mm colorectal cancer which had metastasized to the liver.

[2] Hypoxic regions within the tumor : Inside a malignant tumor arise regions of hypoxia, where not enough oxygen is supplied. Further, tumor blood vessels, which are built with a delay following growth of a tumor, are more fragile than those of normal tissue and are prone to repeated blockage or reflux. This is known to temporarily create a hypoxic environment, even in the vicinity of a tumor blood vessel. Cancer cells in such a hypoxic environment are reported to generally show resistance to anticancer drugs as well as radiotherapy. It is also said that cancer cells in hypoxic environments advance their migratory and motile abilities (their capacity for movement) to attempt to avoid poor environments, and this leads to the advancement of metastasis and the invasive capacity of the cancer.

Center for Public Affairs and Communications
Tokyo Institute of Technology