Pursuing the mechanism of chaperone and prion

This "Spotlight" series features a laboratory from the Department and introduces you to the laboratory's research projects and outcomes. This time we focus on Taguchi Laboratory.

Life depends on proteins. Proteins are linear chains of amino acids (polypeptide chains) that adopt unique three-dimensional structures. The polypeptide chains, which are emerged from the ribosome in the cell, must fold into the tertiary structures for biological functions. Although the folding process is spontaneous, protein folding is often hampered by inter-molecular protein aggregation, which can be prevented by a variety of chaperone proteins in the cell. Our lab interests are focused on the molecular mechanisms that affect the protein folding in the cell. How chaperones assist in the protein folding in the cell? Which proteins are aggregation-prone? What are the determinants that define the aggregation-prone propensity and the chaperone dependency?

In addition, we are also working on the biology of prion/amyloids. A subset of proteins forms amyloids, which are ordered aggregates composed of cross-beta sheet structures. Amyloid aggregates are associated with various human neurodegenerative diseases, including Alzheimer's disease and Huntington's disease. Amyloids include prions, defined as infectious proteins, which are responsible for mammalian transmissible spongiform encephalopathies such as mad-cow disease. The concept of prions has been expanded to include several epigenetically heritable traits in fungi, the yeast prions. We are pursuing to elucidate the mechanism underlying the propagation of prions using yeast prions as a model. 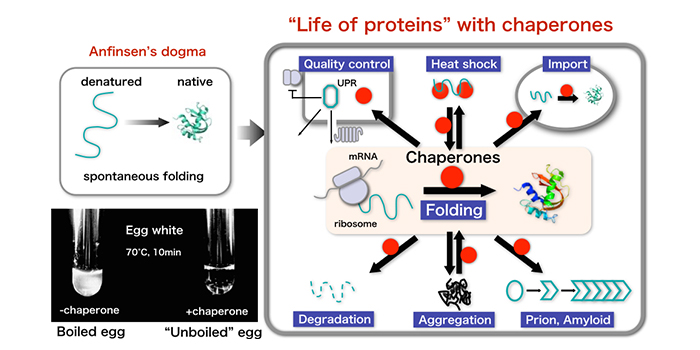