On October 28, it was determined that Honorary Professor Yoshinori Ohsumi would receive the 2016 Order of Culture.

The Order of Culture, Japan's highest cultural honor, is an order presented to those who have made important contributions to the nation's science, technology, art, literature, or other field related to culture.

Ohsumi has contributed greatly to the field of cell biology, clarifying the molecular mechanism and diverse physiological significance of autophagy — the self-degradative process in which cells decompose proteins within themselves to adapt to nutritional environments — and elevating the study of autophagy to the forefront of advanced life science research. 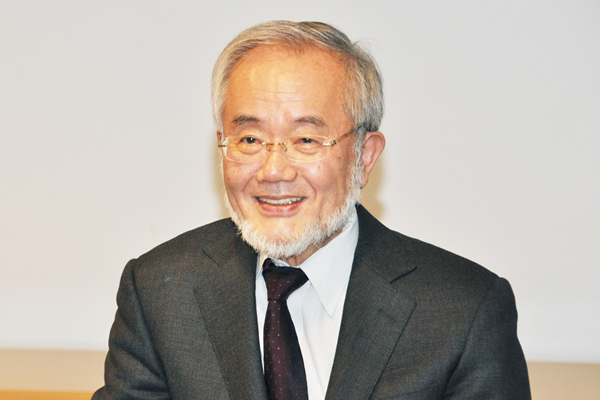 In addition to being named a Person of Cultural Merit last fiscal year, I was unofficially notified about the Order of Culture this year. I have no words other than to say that it is a great honor.

When I saw the names of the 384 people who have received this decoration in the past, I felt unworthy of such a great honor. I cannot change who I am, but in harmony with its name, the Order of Culture, I want to do what I can with my meager abilities to improve Japan so that it can be proud of its culture throughout the world.

Biological science is a small science, and its research includes personal aspects, but cooperation with many people is essential in order to develop research to a larger scale. Thanks to the many people who have supported my autophagy research over the past 28 years, it has now become a major field. There is no way for me to mention each person's name, but I would like to take this opportunity to show my appreciation to the precious members of my laboratory and the many researchers I have had the pleasure of collaborating with.