Analysis and utilization of microbial communities

This "Spotlight" series features a laboratory from the Department and introduces you to the laboratory's research projects and outcomes. This time we focus on Nakashima Laboratory.

※Associate Professor Nakashima moved to another research institution on December 1, 2017. 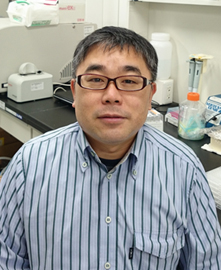 Our research is focused on analyzing and utilizing bacterial populations without isolating individual bacteria.

Various bacteria live in soil, water, air, and the bodies of animals. We think that there are two problems in current bacterial researches. First, most researches are carried out using isolated pure cultures, but it is said that only a small percentage of the microbes that exist on earth has been isolated so far. Second, some bacteria live in the planktonic state whereas others live as sessile cells; although the majority of microbes on earth is thought to be in the latter state, they are preferentially cultured in planktonic states in laboratories. As one familiar example, slimy structures are routinely found on kitchen sinks, which is called biofilm and made of a variety of sessile bacteria.

We believe that industrially and pharmaceutically valuable genes are buried in untouched bacterial communities. In other words, bacterial communities are full of treasures. Also, emergence of biofilms is problematic in medical and sanitary fields. Therefore, we are trying to do the following researches.