This "Spotlight" series features a laboratory from the Department and introduces you to the laboratory's research projects and outcomes. This time we focus on Iwasaki Laboratory. 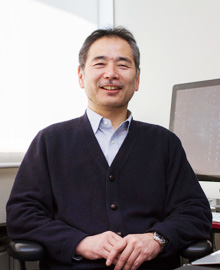 What is the research subject of Dr. Iwasaki's laboratory?

Homologous recombination (HR) involves the exchange of sequences between two homologous DNA molecules and occurs in all living organisms. It plays important roles not only in generating genetic diversity but also in maintaining genome integrity by mediating DNA repair. The molecular mechanism of HR can be divided into three steps (early, central, and late). The early step or initial step is a process during which a recombinogenic single-stranded DNA with a 3' overhang is produced. A protein complex composed of Mre11, Rad50 and Nbs1 (namely MRN complex), in addition to other protein factors, such as nucleases and helicases, are involved in this process. Subsequently, a recombinase (namely Rad51, Dmc1, or RecA) binds to the resultant single-stranded region to form a nucleoprotein filament. This nucleoprotein filament (namely, presynaptic filament) initiates an homology search and catalyzes the strand exchange reaction, forming an intermediate with a unique DNA structure called a D-loop. Auxiliary protein factors (i.e., BRCA2, Rad52, and the Swi5-Sfr1 complex, among others) are required to form and activate the presynaptic filament. The D-loop may be further processed to form a Holliday junction, the classically proposed recombination intermediate of the HR reaction. In the late step, the intermediates are converted to recombination products (recombined DNA molecules) through several genetic pathways.

Our laboratory is interested in the molecular mechanisms of HR. How does the MRN complex generate recombinogenic single-stranded DNA? How do recombinases find homologous DNA and catalyze the DNA strand-exchange reaction? What is the nature of the auxiliary protein factors that activate recombinase filaments? How is the Holliday junction formed and resolved? What determines the choice of one pathway over another? These are some of the questions we are trying to address in our laboratory. To explore them, we take a multidimensional approach that includes molecular biology, genetics, biochemistry, physicochemistry, and structural biology. We use mainly the fission yeast, Schizosaccharomyces pombe, as a model organism.