Researchers at Tokyo Tech reveal that a thin film transitions to a superconducting state at a temperature far above absolute zero — a potential boon for the field of superconductivity.

Superconductivity is the phenomenon by which some materials, when cooled to a certain temperature, exhibit the unusual property of allowing an electrical current to flow through them unimpeded. This means an electrical current can continue to flow through a circuit constructed from a superconductor without the application of any additional power. This type of current expels magnetic fields from within superconductors; a useful property harnessed via the use of superconducting magnets in numerous areas such as computing, medical equipment, and particle accelerators.

Recently, Tokyo Tech researchers achieved a major breakthrough in superconductivity. They showed that a thin film comprising the elements iron and selenium can be induced to switch from an insulator-like state where it resists the flow of electricity to one where electricity flows through it freely at a much higher than normal temperature. They also managed to reveal the mechanism by which this occurs: the accumulation of electrons at an extremely high density on the film's surface. The high temperature at which this transition occurs, -238℃, or 35 degrees above absolute zero, widens the range of possible experiments and applications in superconductivity.

The study, recently reported online in the journal Proceedings of the National Academy of Sciences of the United States of America, shows that an iron selenide film approximately 10-nm thick transitions from an electrical insulator-like state to a superconducting one at a temperature of 35 K, more than fourfold the equivalent temperature for the same type of film with a thickness of 110 nm.

"We used an electric double-layer transistor with a gate voltage of 5.5 V applied to thin epitaxial films of FeSe to induce a superconductive state," coauthor Hidenori Hiramatsu says. "We found that electrons had accumulated at a very high level in the FeSe channel, which caused the high-temperature transition to superconductivity."

High-temperature superconductivity is an important subfield because it overcomes many of the difficulties associated with having to maintain conditions very close to absolute zero, such as the need for cooling with liquid helium, which is both difficult and expensive to produce and use.

"The fact that thin FeSe changes from an insulator to a superconductor at 35 K means we can now examine the induction of superconduction without having to perform doping with impurities, which can degrade the structure of the material and carrier transport," lead author Kota Hanzawa explains. "We should now be able to determine the absolute highest temperature at which transitions to superconductivity can occur. This can benefit research and applications across our field."

The Tokyo Tech team plans to build on its findings in high-temperature superconductivity to develop more real-world applications utilizing the remarkable properties of superconducting materials. 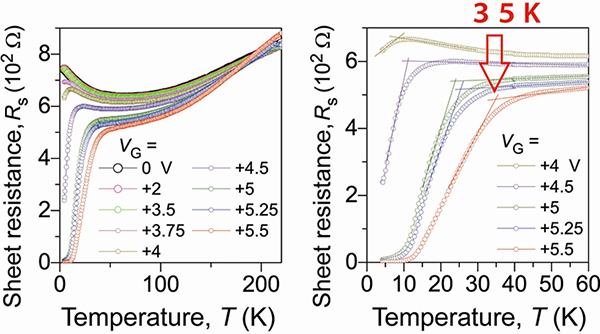 Figure 2.
Sheet resistance versus temperature (Rs-T) curves of EDLT under gate bias (VG) of 0 to +5.5 V. The right panel is an enlarged version of the left. 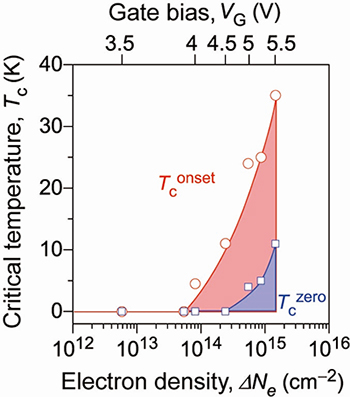