This "Spotlight" series features a laboratory from the Department and introduces you to the laboratory's research projects and outcomes. This time we focus on Naoyuki Yamamoto Laboratory. 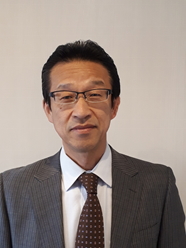 In our laboratory, we are trying to search various kinds of functional food materials act on our health. Especially, we focused our study on peptides and probiotic bacteria, such as lactobacilli. Throughout the research, we aim to apply our basic technologies for industrial use. Currently, we are also trying to find novel sensing molecules likely exist on gut which may be crucial to promote our health and be also useful for the development of functional materials in the future.

Protein hydrolysates which are important for our nutrients and also have potential for various functions for our health. In our study, antihypertensive peptides, Val-Pro-Pro and Ile-Pro-Pro, were released by the proteolytic actions of Lactobacillus helveticus strain. Mechanism study revealed accumulations of both peptides into lung and aorta of spontaneously hypertensive rats after oral administrations of the peptides (Fig left). Especially, both peptides were accumulated in endothelial cells of aorta (Fig right). Moreover, the accumulated peptides suggested the inhibition of angiotensin I-converting enzyme activity in aorta to reduce blood pressure and potential for the reduction of blood coagulation and improvement of arterial stiffness (Fig below). 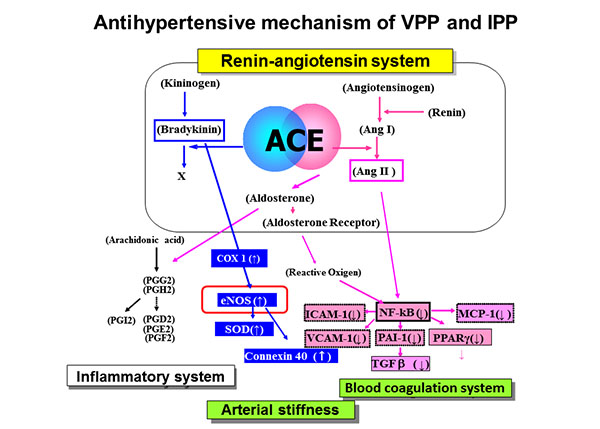 Specific cell components displayed on Lactobacillus strain need for the interactions with host cells to promote our health are studied in more detail. Throughout these studied, we tried to understand the importance of the specific compounds and use them to select novel functional materials. For example, we clarified proteolytic system of L. helveticus to produce the antihypertensive peptides, VPP and IPP. We also discovered a novel regulatory system of the proteolytic system (BCARR) by amino acids (Fig). Release of the long peptide containing VPP and IPP sequences by an extracellular proteinase (I), uptake of the long peptide via oligopeptide transporter (II), intracellular processing of the peptides to amino acids by peptidases (III), BCARR-BCAA complex formation (IV), binding of the complex (CBS domain) to the BCARR-box and repression of proteolysis gene transcription (V). 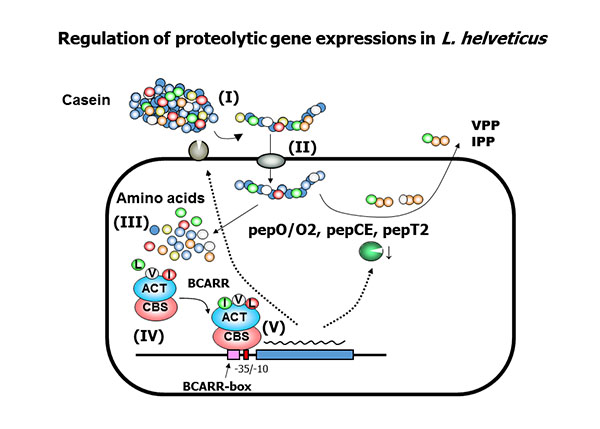 Intestinal microbes are well known for their interaction with our intestine, however, little is known about the role of the microbes in our gut and key components involved in their communications. Many health benefits of lactic acid bacteria have been reported so far, and are applied for the food, medicine, and feed stuff. In our previous study, we successfully selected a Lactobacillus strain with an ability to reduce the serum IgE based on the animal model sutudy. It showed significant improvements of various allergy symptoms in some clinical studies. Detailed mechanism study revealed that the strain might access to dendritic cells after uptake into M cells in gut. Key components in the Lactobacillus strain need for the binding to M cells were also identified. The binding of the Lactobacillus strain to M cells is essential process to activate gut immune system (Fig below). Now, we are trying to compare the immunostimulation effects with other Lactobacillus strains.

Various digestive and absorption systems play important roles for the uptake of many kinds of nutrients in our gut. Moreover, there are immune system, endocrine system and nerve system as more functional systems. However, little is known about the detailed roles and key molecules involved in these systems. So, we are searching novel sensing molecules likely exist on the gut and need to promote biological function. We would like to find various novel functional food components by using of novel sensing system. 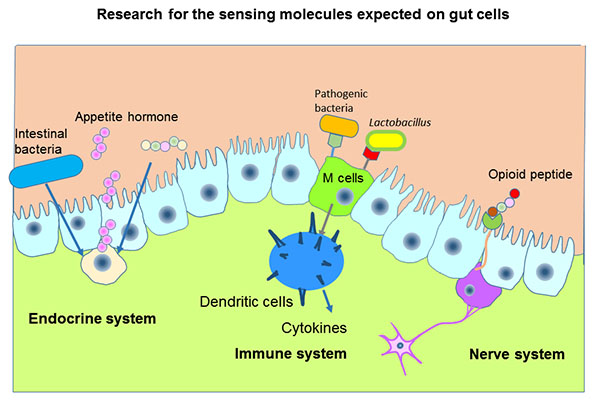