Researchers at Tokyo Tech have identified an enzyme that controls how much our cells secrete collagen. As collagen imbalance is linked to a range of human diseases, the study provides clues to new therapeutic strategies. Moreover, the findings could facilitate efficient production of collagen for the food, cosmetic and pharmaceutical industries. 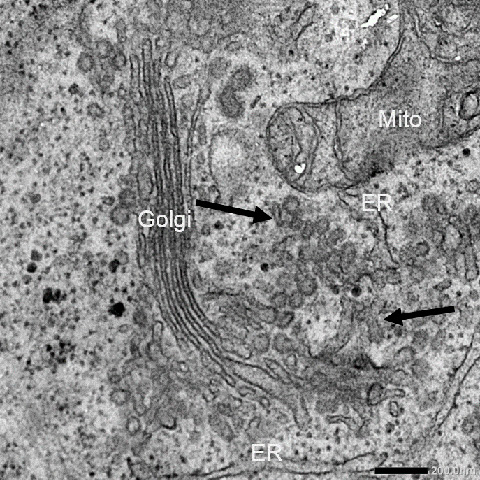 Figure 1. Image of a cell's interior without USP8

Electron microscopy imaging reveals the presence of many interconnected vesicles, which appear to behave like collagen carriers (indicated by arrows).

All of our cells make and release proteins. The proteins are packaged as "cargo" in tiny, bubble-like vesicles before being transported outside the cell. This process, known as secretion, is vital to healthy growth and development.

Although many studies have shown how these vesicles, called COPII carriers1, handle relatively small-sized cargo, few have focused on the workings of unusually large carriers known to package very large proteins, such as collagen.

Now, a study by researchers including Masayuki Komada, Toshiaki Fukushima and graduate student Kohei Kawaguchi at Tokyo Tech has identified USP8 as a key enzyme involved in controlling the formation of large collagen carriers. They have reported their findings in the journal Biochemical and Biophysical Research Communications. 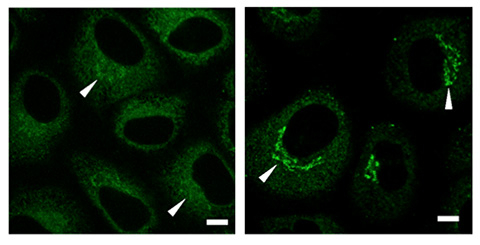 Figure 2. Images of cells with USP8 (left panel) and without USP8 (right panel)

Immunostaining experiments revealed a high concentration of collagen (green signals) in the Golgi region prior to secretion.

The findings have big implications for medicine and biotechnology. Excessive collagen secretion in the human body is known to cause organ fibrosis2, while too little collagen secretion is associated with bone diseases including cranio-lenticulo-sutural dysplasia (CLSD) and Cole-Carpenter syndrome. New treatments for these diseases could be developed through further understanding of USP8's exact mode of action. Such knowledge could also provide new ways of scaling up commercial production of collagen.

The researchers have demonstrated that the enzyme works by deubiquitinating a protein called Sec31A, a component of the COPII vesicle coat required for protein export.

One particular group of proteins called the USP8-STAM1 complex3 appears to be responsible for deubiquitinating Sec31A, as illustrated in Figure 3. 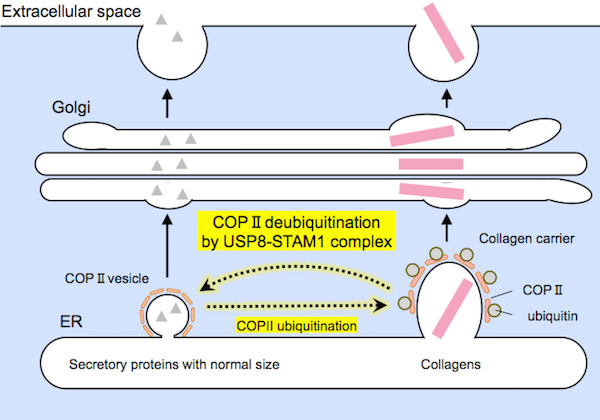 Relatively small-sized proteins (on the left) and large collagens (on the right) are encapsulated by COPII carriers of suitable sizes prior to secretion. The USP8-STAM1 complex inhibits the formation of large collagen carriers.

The study builds on many years of research that have illuminated the versatility of USP8.

"We had previously reported that USP8 regulates pituitary hormone secretion4," says Fukushima, referring to a paper published in Nature Genetics

in 2015. "In the process of that study, we accidentally found that the USP8-STAM1 complex binds to Sec31."

It was this "accidental" finding, combined with promising results from other groups in the US, that led the team to examine the role of USP8 in the formation of COPII carriers.

The present study therefore reveals a "new face" of the USP8 enzyme, and Fukushima hints that there may be more surprises to come. USP8 belongs to a family of around 90 known deubiquitinating enzymes, which continue to be a hot topic in cellular biology.

Bubble-like vesicles that wrap up proteins inside cells. They typically have a diameter of 60-70 nanometers (nm), but larger ones are capable of transporting macromolecules such as collagen, which can have a length of 300-400 nm or more.

The development of excessive fibrous tissues, which can lead to organ malfunction.

A group of proteins consisting of the enzyme USP8 and a signal transducing adaptor molecule, STAM1. The latter possesses substrate recognition domains, which enable it to recognize ubiquitinated proteins. These proteins can then be deubiquitinated by USP8.

The transportation of molecules into a cell via its membrane.