Fish have the extraordinary ability to regenerate lost fins and other appendages containing cartilage and bone. The cells responsible for the regeneration offer new clues on how to regenerate tissues in humans. Researchers at Tokyo Institute of Technology (Tokyo Tech) have found a dormant progenitor cell population in zebrafish that regenerates bone cells, or osteoblasts. The study can be read in Developmental Cell.

How osteoblasts are supplied during bone regeneration has been controversial among bone researchers. According to Atsushi Kawakami, an Associate Professor who specializes in tissue regeneration and led the study, scientists disagree on how these cells are made. 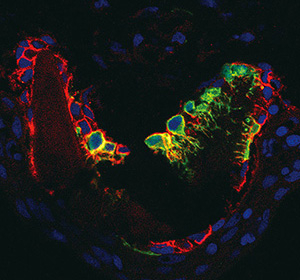 Figure 2. OPC in the niche of fin joint

OPCs marked in green, osteocyte-lineage marker, Zns5, in red, and cell nuclei in blue.
OPCs that are dormant in the niche have a unique shape with dendrites.

In conclusion, the findings suggest that a lineage of bone-producing cell, which are specified in embryonic somites, are maintained throughout the animal lives as progenitor cells for bone regeneration and also for bone maintenance (Figure 3).

"We use animal models because they show us a number of essential cellular and molecular mechanisms behind our existence. Considering the higher bone regeneration potential in zebrafish, OPCs will be a potential target for enhancing bone regeneration in mammals" said Kawakami.

Figure 3. Summary of the study

The study revealed that OPCs originate embryonic somites, develop through mesenchymal precursors to settle in niches of bone-forming tissues like the fish fin ray. OPCs are activated upon tissue injury and recruited to repair bones.