On December 5, 2016, Honorary Professor Yoshinori Ohsumi was awarded the Breakthrough Prize in Life Sciences for "elucidating autophagy, the recycling system that cells use to generate nutrients from their own inessential or damaged components." On the same day (December 4 local time), Ohsumi and his wife attended the awards gala at the NASA Ames Research Center in Silicon Valley hosted by Morgan Freeman, with live performance by Alicia Keys.

The Breakthrough Prizes were founded by Sergey Brin and Anne Wojcicki, Mark Zuckerberg and Priscilla Chan, and Yuri and Julia Milner, award outstanding achievements in life sciences, physics, and mathematics. Laureates of all prizes are chosen by selection committees comprised of prior prize recipients.

The Breakthrough Prize in Life Sciences is a prize awarded up to five scientists each year, one of which is for work contributing to the understanding of Parkinson's disease and neurodegenerative disorders. An award of 3 million dollars is given to each winner. In 2013, Professor Shinya Yamanaka of Kyoto University, who received the Nobel Prize in Physiology or Medicine, also received this prize. 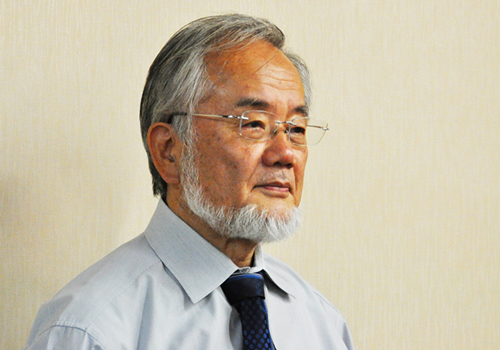 I was aware of the Breakthrough Prize in Life Sciences, but I never expected to be in consideration for receiving it. This is a surprise and a great honor. I will continue to work to advance the research in this field.