Explore the brain to understand adaptive control mechanisms of the arm

The Department has a variety of laboratories for Human Centered Science and Biomedical Engineering, in which cutting-edge innovative research is being undertaken not only in basic science and engineering but also in the areas of medicine, pharmacy, agriculture, and multidisciplinary sciences.

This "Spotlight" series features a laboratory from the Department and introduces you to the laboratory's research projects and outcomes. This time we focus on Miyashita Laboratory. 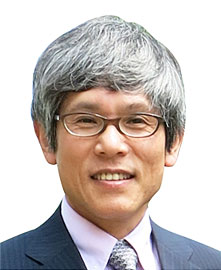 Thanks to accumulating knowledge of functional anatomy about the brain, it has been possible to presume the flow of information regarding arm movements within it. Now, a question will arise; which regions of the brain concern execution of the movement? Positron emission tomography (PET: SHR-7700, Hamamatsu Photonics) was employed to answer the question. As expected, parts of the motor cortex, somatosensory cortex, and parietal cortex were activated.

When I worked with Dr. Hiroshi Asanuma at the Rockefeller University, we found so-called Hebbian plasticity in neurons of the motor cortex that received synaptic input from the somatosensory cortex. To reveal the function of these plasticity, we tentatively tried to identify brain regions using PET which amount of activity was changed relating to motor learning. Interestingly, a part of the parietal cortex, which was correlated activation with execution of the movement, showed increased activity after the learning started and gradually decreased activity as the learning progressed. What is the functional role of this region, do you think?

Modeling the control of arm movements by the brain 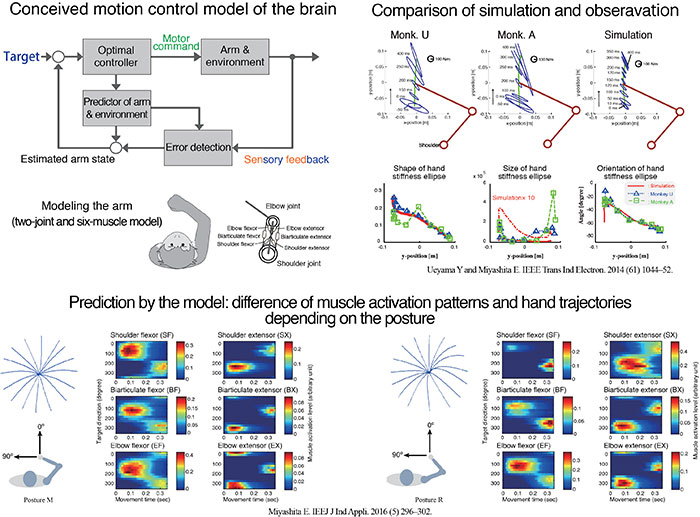 How the brain controls the arm? I conceive that modern control theory will help us to understand it. In this framework, the product of estimated state of the arm and a feedback gain generates motor command. State predictor of the arm predicts the state of it using the motor command, and a plausible state is estimated depending on the error of the predicted state and observed state.

Simulation experiments demonstrated that a control model based on the modern control theory was able to fairly reproduce the characteristics (except the size) of measured stiffness ellipse of the hand during reaching movements in the horizontal plane. The model predicted that a hand trajectory varied from nearly straight to moderately curved depending on the start position and movement direction. Imagine how to draw a straight line without a ruler.

Information representation of arm movements in the brain 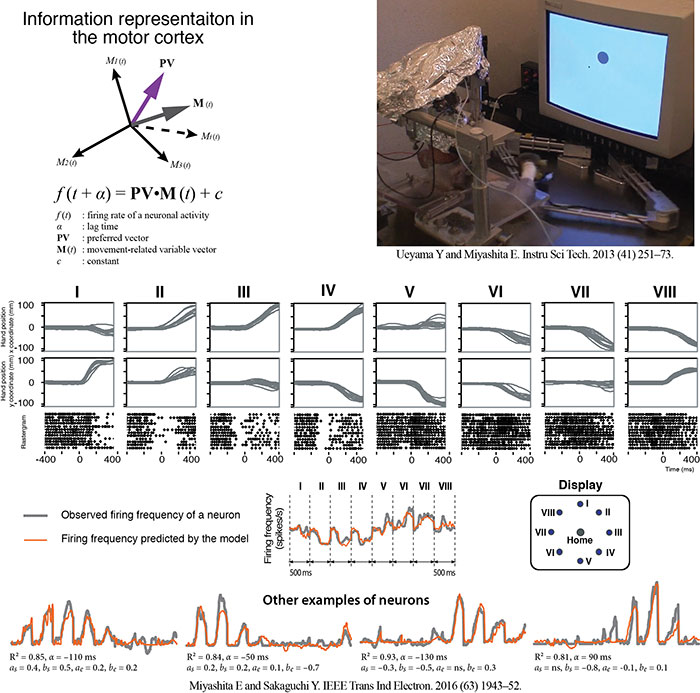 Although the final goal is to understand how the brain executes what kind of computation, we are trying to reveal what kind of movement related information is encoded as activity of neuron in the motor cortex as a tentative goal.

We have reported that joint torques and joint angular velocities of the arm are able to explain major variability of activity of many neurons in the motor cortex during arm movements in the horizontal plane.

*Find more about the lab and the latest activities at the laboratory.