Application of great potentials of microbes!

This "Spotlight" series features a laboratory from the Department and introduces you to the laboratory's research projects and outcomes. This time we focus on Fukui Laboratory. 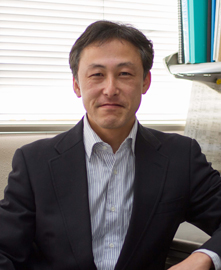 Hyperthermophiles, microbes capable of growing at temperatures higher than 90 ℃, are quite interesting research subjects from various aspects, such as their strategies for thermal adaptation, quite unique metabolic features, phylogenetic positions near to the root, and so on. They have also attracted attentions from industrial points of view as potential resources for highly thermostable enzymes. Our lab is focusing on the hyperthermophilic archaeon Thermococcus kodakaraensis KOD1, which is a producer of the excellent DNA polymerase for PCR amplification. By applying the versatile genetic manipulation system (the first for hyperthermophiles), we are investigating several cellular functions and metabolisms of this archaeon, as well as engineering the metabolic pathways for efficient production of H2 from biomass resources.

Another research topic is microbial synthesis of polyhydroxyalkanoates (PHAs), which are biomass-based biodegradable polymers attracting industrial attentions as possible alternatives to petroleum-based polymeric materials. However unfortunately, the most abundant PHA in nature, poly(3-hydroxybutyrate), is not suitable for general practical applications due to the hard and stiff properties. We are studying on elucidation of physiology and metabolic pathways of PHA-producing bacteria, and conducting genetic engineering, protein engineering, and metabolic engineering of the PHA-producers in order to achieve efficient production of flexible and practical PHA copolyesters from inexpensive carbon sources.

Studies on microbial synthesis of bioplastics