To reduce the energy requirements of the Haber-Bosch process, which converts nitrogen and hydrogen to ammonia, researchers from Tokyo Tech have developed a metal nitride catalyst containing an active metal (Ni) on a lanthanum nitride support that is stable in presence of moisture. Since the catalyst doesn't contain ruthenium, it presents an inexpensive option for reducing the carbon footprint of ammonia production. 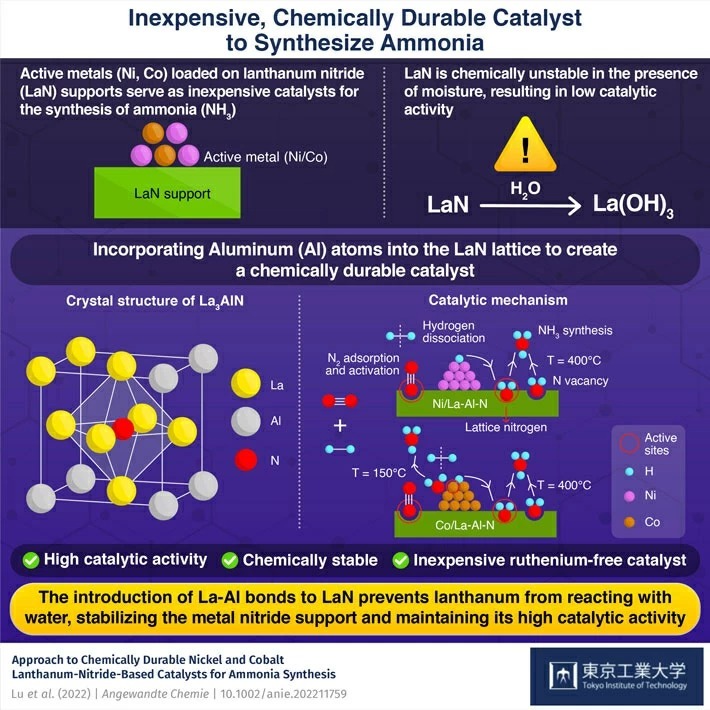 The Haber-Bosch process, which is commonly used to synthesize ammonia (NH3)–the foundation for synthetic nitrogen fertilizers–by combining hydrogen (H2) and nitrogen (N2) over catalysts at high pressures and temperatures, is one of the most important scientific discoveries that has helped improve crop yields and increase food production globally.

However, the process requires high fossil fuel energy inputs due to its requirements of high temperatures and pressure. Hydrogen used for this process is produced from natural gas (mainly methane). This hydrogen-producing process is energy-consuming and accompanies huge emission of carbon dioxide. To overcome these issues, various catalysts have been developed to allow the reaction to proceed under milder conditions using hydrogen produced by water electrolysis via renewable energy. Among them are nitride-based catalysts that contain active metal nanoparticles like nickel and cobalt (Ni, Co) loaded on lanthanum nitride (LaN) supports. In these catalysts, both the support and the active metal are involved in the production of NH3. The active metal splits the H2 while the LaN support contains nitrogen vacancies and nitrogen atoms in its crystal structure that adsorb and activate nitrogen (N2). While these catalysts are inexpensive (since they avoid using ruthenium, which is costly), their catalytic performance is degraded in the presence of moisture, with the LaN support transforming into lanthanum hydroxide (La(OH)3).

Now, in a new study published in Angewandte Chemie

, researchers from China and Japan led by Professor Hideo Hosono from the Tokyo Institute of Technology (Tokyo Tech), Japan, have developed a chemically stable catalyst that is stable in the presence of moisture. Taking inspiration from stable rare-earth compounds containing chemical bonds between a rare-earth metal (in this case, La) and a metal, they incorporated aluminum atoms into the LaN structure and synthesized a chemically stable La3AlN support containing La-Al bonds that prevent lanthanum atoms from reacting with moisture.

The La-Al-N support along with the active metals, such as nickel and cobalt (Ni, Co), was able to produce NH3 at rates similar to that with conventional metal nitride catalysts and could maintain a stable production when fed with nitrogen gas-containing moisture. "The Ni- or Co-loaded La-Al-N catalysts showed no distinct degradation following exposure to 3.5% moisture," says Prof. Hosono.

While the Al atoms stabilized the support, the lattice nitrogen and nitrogen defects present in the doped support enabled the synthesis of ammonia in a manner similar to the conventional active metal/rare-earth metal nitride catalysts. "Lattice nitrogen as well as nitrogen vacancy in La-Al-N play a key role in N2 adsorption, with the La-Al-N support and the active metal Ni being responsible for N2 and H2 absorption and activation, respectively," explains Prof. Hosono.

The Haber-Bosch process is an energy-intensive chemical reaction, accounting for about 1% of global annual carbon dioxide emissions. While alternative environmentally friendly approaches for NH3 production are being investigated, introducing inexpensive catalysts could provide immediate benefits by allowing the process to operate under milder conditions.