In recent years, the energy consumption in developed countries has been rather wasteful. Nearly two-thirds of the total energy is typically discarded into the environment as "waste heat," which ends up contributing to global warming. Finding a way to productively use this heat has been at the forefront of every material researcher's priority. 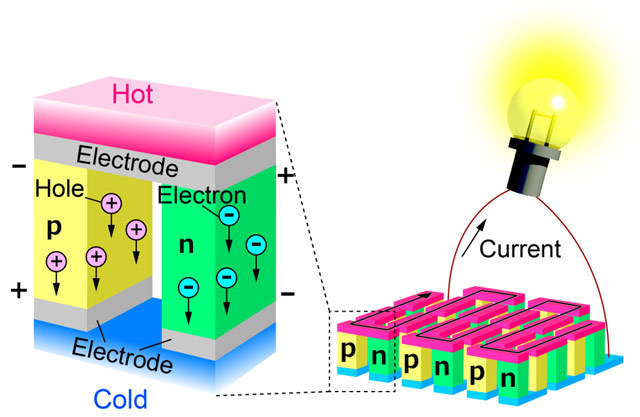 One particular semiconductor material that scientists have recently turned their attention to is tin monoselenide (SnSe), which reportedly exhibits the world's highest thermoelectric conversion performance index ZT value. However, SnSe is incapable of controlling the charge carrier type with ease. Doping with alkali ions improves p-type thermoelectric performance but the alkali ions are volatile and diffusive elements, and are not suitable for high-temperature applications. Adding bismuth and iodine to make it n-type, on the other hand, results in low electron concentrations.

In a new study published in Advanced Functional Materials, a team of scientists from Tokyo Tech, Japan, led by Prof. Takayoshi Katase discovered that when doped with antimony (Sb), SnSe, denoted as (Sn1-xSbx)Se, exhibits a peculiar switching of conduction type. Specifically, the team observed that at low doping concentrations, (Sn1-xSbx)Se started out with p-type conduction but switched to n-type with increasing doping, and finally switched back to p-type for high concentrations (see Figure 2). The elaborate analyses and calculations revealed an interesting charge type switching mechanism which, the team found, has to do with the distribution of Sb substitution sites between Sn and Se. They attributed this switching behavior to a switching of major Sb substitution site from Se (SbSe) to Sn (SbSn) with increasing doping. 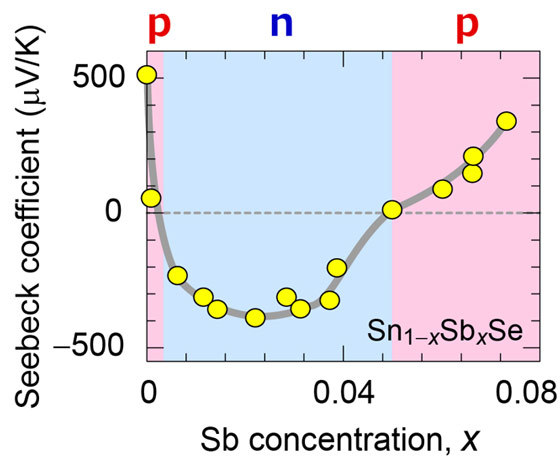 Scientists explained that at very low Sb concentrations, the p-type conduction occurs solely due to holes supplied by Sn vacancy. But as doping increases, SbSn starts to donate electrons while SbSe forms an "impurity band" that allows conduction through it, resulting in the observed n-type behavior. However, as doping level goes up further, the Fermi level approaches the midgap level located between the SbSe impurity band and conduction band minimum, resulting in the p-type conduction.

With such remarkable insights to offer, the results are undoubtedly a potential game changer for SnSe. However, Prof. Takase foresees an even broader scope. "Now that we understand the mechanism at play in the polarity switching of Sb-doped SnSe, we can hope to optimize the bulk synthesis process to further improve its thermoelectric performance and, in turn, realize high-performance thermoelectric conversion devices with it," surmises Prof. Katase.

What's more, the researchers also expect that the doping-site-switching based polarity control will become more versatile in the future and can be applied to other semiconductor materials whose carrier types are difficult to control otherwise. Here's hoping that this leads to a future where waste heat won't be a waste anymore!