Shedding Light on the Development of Efficient Blue-Emitting Semiconductors

Scientists at Tokyo Institute of Technology (Tokyo Tech) have discovered a new alkali copper halide, Cs5Cu3Cl6I2, that emits pure blue light. The combination of the two halide ions, chloride and iodide, gives the material a crystalline structure made of zigzag chains and peculiar properties that result in highly efficient photoluminescence. This novel compound could be readily used to produce relatively inexpensive and eco-friendly white LEDs and reduce the energy used in the generation of everyday artificial light. 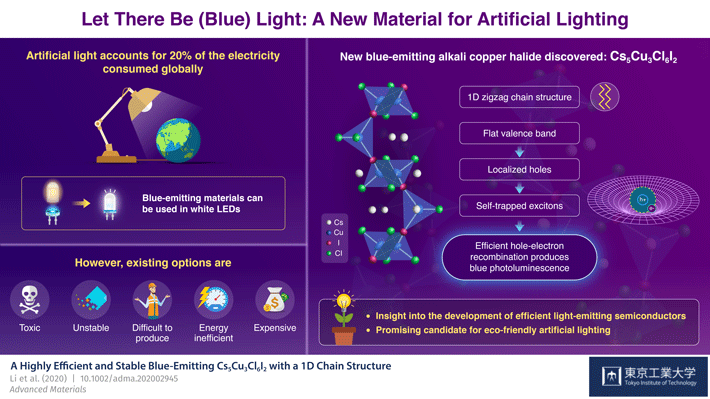 Artificial light accounts for approximately 20% of the total electricity consumed globally. Considering the present environmental crisis, this makes the discovery of energy-efficient light-emitting materials particularly important, especially those that produce white light. Over the last decade, technological advances in solid-state lighting, the subfield of semiconductors research concerned with light-emitting compounds, has led to the widespread use of white LEDs. However, most of these LEDs are actually a blue LED chip coated with a yellow luminescent material; the emitted yellow light combined with the remaining blue light produces the white color.

In a recent study, published in Advanced Materials

, a team of scientists from Tokyo Institute of Technology, Japan, discovered a new alkali copper halide, Cs5Cu3Cl6I2, that fills all the criteria. Unlike Cs3Cu2I5, another promising blue-emitting candidate for future devices, the proposed compound has two different halides, chloride and iodide. Although mixed-halide materials have been tried before, Cs5Cu3Cl6I2 has unique properties that emerge specifically from the use of I− and Cl− ions.

It turns out that Cs5Cu3Cl6I2 forms a one-dimensional zigzag chain out of two different subunits, and the links in the chain are exclusively bridged by I− ions. The scientists also found another important feature: its valence band, which describes the energy levels of electrons in different positions of the material's crystalline structure, is almost flat (of constant energy). In turn, this characteristic makes photo-generated holes—positively charged pseudoparticles that represent the absence of a photoexcited electron—"heavier." These holes tend to become immobilized due to their strong interaction with I− ions, and they easily bond with nearby free electrons to form a small system known as an exciton.

Excitons induce distortions in the crystal structure. Much like the fact that one would have trouble moving atop a suspended large net that is considerably deformed by one's own weight, the excitons become trapped in place by their own effect. This is crucial for the highly efficient generation of blue light. Professor Junghwan Kim, who led the study, explains: "The self-trapped excitons are localized forms of optically excited energy; the eventual recombination of their constituting electron–hole pair causes photoluminescence, the emission of blue light in this case."

In addition to its efficiency, Cs5Cu3Cl6I2 has other attractive properties. It is exclusively composed of abundant materials, making it relatively inexpensive. Moreover, it is much more stable in air than Cs3Cu2I5 and other alkali copper halide compounds. The scientists found that the performance of Cs5Cu3Cl6I2 did not degrade when stored in air for three months, while similar light-emitting compounds performed worse after merely days. Finally, Cs5Cu3Cl6I2 does not require lead, a highly toxic element, making it eco-friendly overall.

Excited about the results of the study, Prof. Kim concludes: "Our findings provide a new perspective for the development of new alkali copper halide candidates and demonstrate that Cs5Cu3Cl6I2 could be a promising blue-emitting material." The light shed by this team of scientists will hopefully lead to more efficient and eco-friendly lighting technology.