The selective oxidation of C–H bonds using oxygen has become a much simpler and more sustainable endeavor, thanks to a novel manganese (Mn)-based catalyst developed by scientists at Tokyo Institute of Technology (Tokyo Tech). Consisting of reusable Mg6MnO8 nanoparticles with unprecedented surface area, their catalyst enables the desired oxidative reactions to occur at mild temperature and pressure conditions without the need for toxic additives, opening doors to more energy-efficient and environmentally friendly chemistry applications. 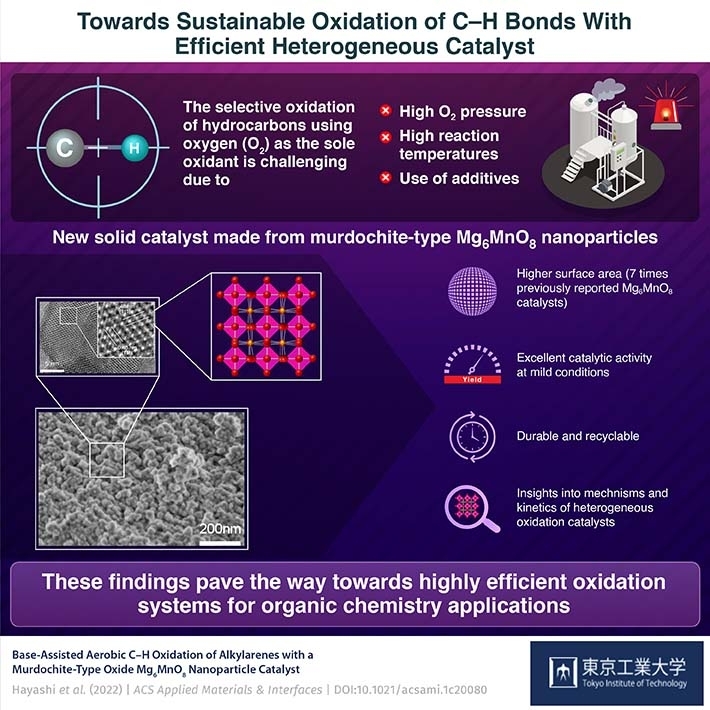 In the chemical industry, the selective cleavage and oxidation of carbon–hydrogen (C–H) bonds, called "oxidative C–H functionalization" is an essential step in the production of many solvents, polymers, and surfactants, as well as intermediate compounds for agrochemicals and pharmaceuticals. Ideally, one would want to use oxygen (O2) as the only oxidant in this process to avoid using more expensive and environmentally taxing substances, such as hydrogen peroxide (H2O2), chlorine (Cl2), or nitric acid (HNO3).

However, using O2 as the oxidant entails some unresolved problems. While some progress has been made in the field of recoverable and reusable catalysts, most heterogeneous systems require high reaction temperatures, high O2 pressures, or the use of toxic additives. In turn, this cripples the scope of potential applications, scalability, and efficiency of these catalytic systems.

Against this backdrop, a team of scientists from Tokyo Tech, led by Associate Professor Keigo Kamata, recently found a promising catalyst for oxidative C–H functionalization. As explained in their paper published in ACS Applied Materials & Interfaces

, they inferred that isolated manganese (Mn) species fixed in a crystalline matrix could constitute a high-performance heterogeneous catalyst even at mild reaction conditions, based on previous knowledge.

Accordingly, they investigated the catalyst murdochite-type Mg6MnO8, a rock salt structure of magnesium oxide (MgO) with one eighth of the Mg2+ ions replaced with Mn4+ ions and another eighth replaced with vacancies, resulting in a crystal with Mn ions and vacancies orderly occupying alternating layers. Using a cost-effective sol–gel method aided by malic acid, the team prepared Mg6MnO8 nanoparticles with a very high surface area. Dr. Kamata elaborates: "The specific surface area of our Mg6MnO8 catalyst was 104 m2/g, about seven times higher than that of Mg6MnO8 synthesized using previously reported methods."

The researchers also demonstrated, through numerous experiments, that their Mg6MnO8 nanoparticles could efficiently catalyze the selective oxidation of C–H of various alkylarene compounds even under mild reaction conditions, namely 40℃ and atmospheric pressure. The yield of the final products was also higher than that obtained using existing Mn-based catalysts. To top things off, the Mg6MnO8 nanoparticles could be easily recovered via filtration and then reused without any apparent loss in catalytic activity after multiple cycles.

Finally, the team sought to understand why their proposed catalyst performed so well through a series of kinetic and mechanistic studies. They concluded that the isolation of redox sites (Mn species, in this case) in a crystalline base matrix (MgO) was a particularly important feature to achieve oxidative C–H functionalization using O2 at mild conditions.

Satisfied with the results and their findings, Dr. Kamata speculates: "Our approach constitutes a promising strategy for the development of highly efficient heterogeneous oxidation systems with wide substrate scopes."

Let us hope this study paves the way to more efficient and environment-friendly catalysts for organic chemistry applications.