Scientists at Tokyo Institute of Technology (Tokyo Tech) demonstrate that breaking the trade-off problem between thermopower and conductivity improves thermoelectric performance. They suggest introducing lattice strain into Mott insulator oxide LaTiO3 converts the electronic state to metal, and increases both thermopower and conductivity to induce a 100-fold increase in power factor, which in turn enables the conversion of waste heat to electricity more efficiently. Their findings could help ensure a more energy-efficient future. 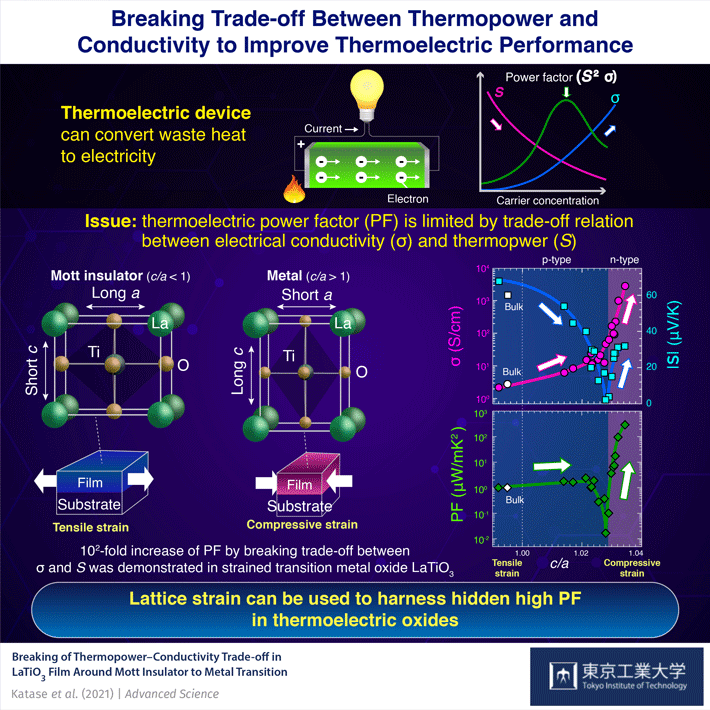 In recent years, energy consumption in developed countries has been rather wasteful. Nearly two-thirds of the total energy is typically discarded as "waste heat," which ends up contributing to global warming. Finding a way to productively use this heat has been every material researcher's priority of late.

One of the possible ways to recover this waste heat as electricity is via "thermoelectric conversion"—a process that uses temperature difference in semiconductors to convert waste heat into electric power. The thermopower (S) is a measure of the magnitude of an induced thermoelectric voltage in response to a temperature difference across the material. The electric power is evaluated by power factor (PF), which is the product of thermopower (S)-squared and electronic conductivity (σ). Therefore, the high electric power (PF) is capable of combining large S with high σ in thermoelectric materials.

In a recent study published in Advanced Science, a team of scientists led by Associate Professor Takayoshi Katase of the Tokyo Tech have discovered a way to break this trade-off. The scientists grew thin films of the Mott insulator oxide LaTiO3 on different substrates and found a way to introduce epitaxial strain, a strain that is born from a mismatch in the lattice structures of the substrate and the deposited (epitaxial) film. The artificial compressive strain was able to change LaTiO3 from the Mott insulator to metal. In the metallic state, increase in both S and σ resulted in a hundred-fold increase in PF. "Different from the conventional way of impurity doping, the behaviors of σ and S are apparently decoupled in lattice strained LaTiO3 films, which leads to a spectacular boost in power factor that defies conventional wisdom," says Dr. Katase.

Increasing the epitaxial compressive strain can induce a change in carrier polarity from p-type to n-type. Dr. Katase and team found that while the absolute value of thermopower increased with increasing carrier concentration under compressive strain, electronic conductivity also increased with increases in carrier mobility due to electronic structure change from Mott insulator to metal. Density functional theory calculation clarified that the Ti 3d band splits to form energy gap in p-type LaTiO3 film, while the energy gap was closed in the n-type film, which led to an unusual simultaneous increase in conductivity and thermopower.