A formerly unnoticed monoclinic distortion in Ca2RuO4 explains its enormous negative thermal expansion (NTE) over a wide range of temperatures, discover researchers from Tokyo Tech. The work promises a different route for the design of unconventional NTE materials, with applications in engines, thermal barrier ceramics, and precision instruments, among other things.

Most materials expand when heated, which is why railway tracks and bridges have special expansion joints to help them cope with extreme weather. But a small number of materials do the opposite. The rare phenomenon of shrinking when heated is called negative thermal expansion (NTE). A material with remarkable NTE is Ca2RuO4 (CRO), which is known as a layered ruthenate.

CRO has been a focus of research since Prof. Koshi Takenaka at Nagoya University found its NTE to extend over a 200-degree range. In a recent study

published in the journal Chemistry of Materials, researchers from Tokyo Institute of Technology (Tokyo Tech), Nagoya University, Kanagawa Institute of Industrial Science and Technology, Osaka Prefecture University, Japan Synchrotron Radiation Research Institute (JASRI) and National Institutes for Quantum and Radiological Science and Technology reveal the physical properties responsible for CRO's intriguing behavior. "Our previous work showed 6.7% volume shrinkage in a CRO sintered body, while the crystallographic change was only 1% and was quite anisotropic. Moreover, a thorough understanding of its origin was lacking, especially on how varying the oxygen content switches NTE to PTE," says Prof. Masaki Azuma, who led the study. Anisotropy refers to a variation in physical properties along different crystal axes.

Prof. Takenaka and his collaborators synthesized two kinds of CRO: reduced CRO and oxidized CRO. The fundamental difference between the two specimens is that oxidized CRO contains a fractional amount of interstitial oxygen in the crystal structure.

The team of researchers, which included Dr. Lei Hu from Tokyo Tech, analyzed reduced CRO and saw that it has a monoclinic crystal structure at low temperatures, which can be understood by three axes that form a rectangular prism with a parallelogram as its base. After experimental investigations and theoretical calculations, they saw that monoclinic CRO has distortions in its crystal structure known as Jahn-Teller distortions, and a rotation of the building block of CRO, a RuO6 octahedron. The monoclinic phase is contracted in one crystallographic direction (c-axis in Figure 1). The Jahn-Teller distortion refers to a geometric distortion of RuO6 that lowers the overall energy of the system. It is these distortions that are responsible for CRO's unusual NTE behavior. The Jahn-Teller distortion is also associated with an orbital ordering in the electronic structure of the system. 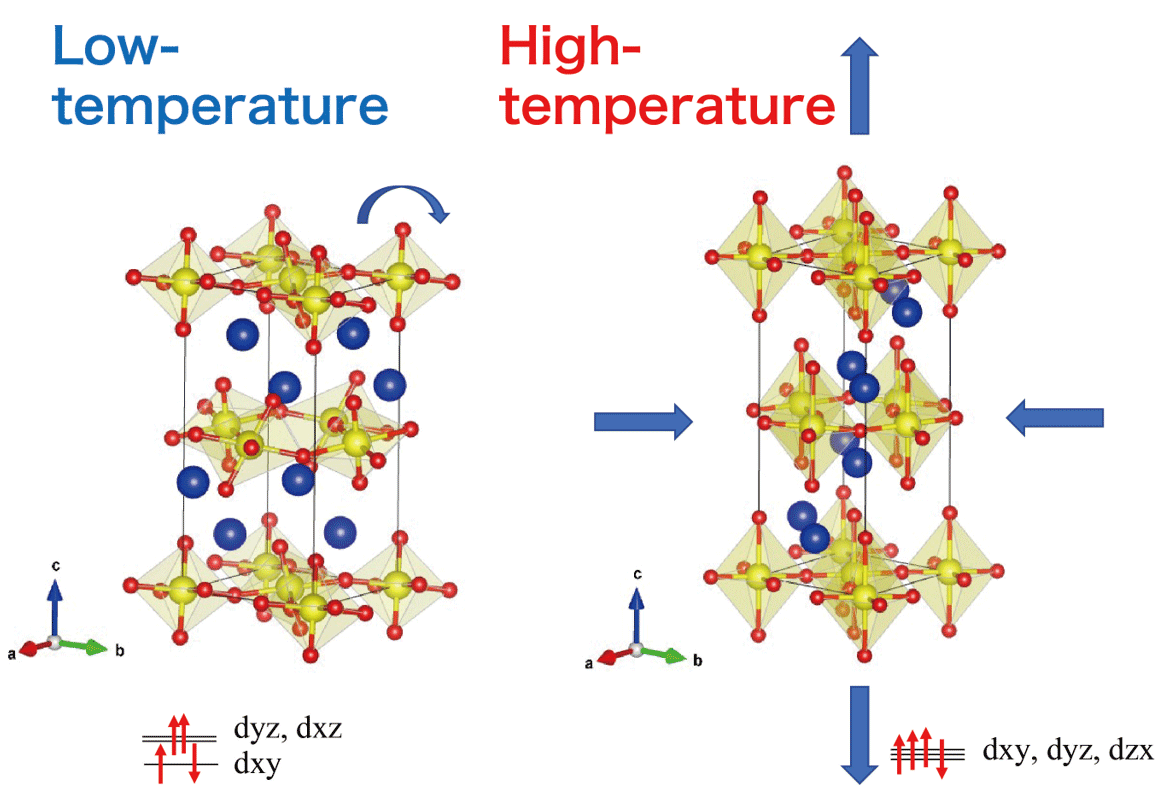 The structural distortions in Ca2RuO4 are responsible for its anisotropic thermal expansion.
Figure courtesy: Masaki Azuma from Tokyo Institute of Technology

When reduced CRO is heated, these distortions disappear and the monoclinic crystal slowly transforms into an orthorhombic structure (a rectangular prism with a rectangular base). The needle-shaped crystal grains that form the material structure expand along the longitudinal direction but contract along the other two axes, and they deform into a drum shape as the temperature rises. This causes a large overall volume contraction due to the reduction of pore between the grains, as schematically illustrated in Figure 2.

This figure shows the changes observed in the material structure and NTE owing to anisotropic thermal expansion of crystal grains.
Figure courtesy: Masaki Azuma from Tokyo Institute of Technology

The interstitial oxygen present in oxidized CRO seems to play a critical role in its absence of NTE. To understand why, Dr Hu performed theoretical calculations on different crystal geometries seen in the experiment. "We believe the interstitial oxygen breaks the orbital ordering and stabilizes elongated RuO6 octahedra, which facilitates the occurrence of positive thermal expansion (PTE)," says Dr Hu.

Exploiting the properties of NTE and PTE can lead to the engineering of composites that show no overall thermal expansion. Such materials would have a reliable, constant performance over large temperature ranges, which makes them highly desirable not just for complex scientific instrumentation but even for everyday objects like cooktops and semiconductors. "This work provides insights into the control of thermal expansion through the orbital degree of freedom, and also sheds light on how structural defects affect crystal, local and electronic structures," concludes Prof. Azuma.

The idea of creating customized thermal materials is fascinating. We, for one, can't wait to see what comes next!

1 Laboratory for Materials and Structures, Tokyo Institute of Technology