One "Ring" to Rule Them All: Curious Interlocked Molecules Show Dual Response

Scientists at Tokyo Institute of Technology design polymers infused with a stress-sensitive molecular unit that respond to external forces by switching on their fluorescence. The researchers demonstrate the fluorescence to be dependent on the magnitude of force and show that it is possible to detect both, reversible and irreversible polymer deformations, opening the door to the exploration of new force regimes in polymers.

Besides causing physical motion, mechanical forces can drive chemical changes in controlled and productive ways, allowing for desirable material properties. One way to go about this is by introducing a so-called mechanophore into the material, molecular units that are sensitive to stress or strain. Specifically, mechanochromic mechanophores, which alter their optical properties in response to mechanical stimuli, are quite useful in quantifying their local mechanical environment.

However, the response mechanism at play in most mechanophores involves severing of chemical bonds. Consequently, they require relatively large mechanical forces to be activated and their response is usually not reversible. To address these issues, researchers led by Prof. Yoshimitsu Sagara from Tokyo Institute of Technology (Tokyo Tech) had previously developed supramolecular mechanophores that show instantly reversible on/off switching of fluorescence without any scission of covalent bonds. The team's next challenge was to determine if both reversible and irreversible mechanoresponses can be elicited from the same molecular motif.

In a new Journal of the American Chemical Society study, the team explores this question using an unusual molecular architecture called "rotaxane" in which a dumbbell-shaped molecule is threaded through a "ring" such that they are mechanically interlocked, i.e. the "ring" cannot be normally pulled out. By attaching a quencher-emitter pair to the rotaxane and selecting appropriate sizes of ring and stopper moieties, the team demonstrates a new type of mechanophore response that can be either reversible or irreversible, depending on the magnitude of the applied force (Figure 1). 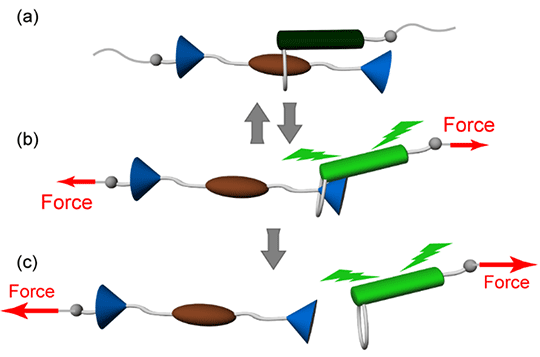 Figure 1. Schematic illustration of the operation of a rotaxane-based mechanophore, displaying (a) force-free state, (b) reversible, and (c) irreversible responses.

"When there is no force applied, the attractive interaction keeps the emitter-containing ring near the quencher fixed on the rotaxane's axle, so that the emission is quenched," explains Sagara. "Upon applying a weak force, the emitter is moved away from the quencher, and its fluorescence is turned on. This effect is reversible, unless the force is sufficiently high to push the ring past the stopper so that irreversible dethreading occurs."

By investigating a carefully designed set of different rotaxanes, the team demonstrated that the combination of appropriately selected ring and stopper moieties having the right sized is crucial to obtain interlocked structures that display such dual response. Tokyo Tech researchers collaborated with Swiss partners from the University of Fribourg's Adolphe Merkle Institute to incorporate the new mechanophores into elastic polyurethane rubbers. These materials which exhibit reversible fluorescence changes over many stretch-and-release cycles to low strains, due to the shuttling function, whereas permanent changes were observed when the rubbers were subjected to repeated deformations to high strains due to dethreading of the ring from the axle. "This mechanism allows one, at least conceptually, to monitor the actual deformation of polymer materials and examine mechanical damage that were inflicted in the past on the basis of an optical signal" says Sagara.

Speculating the possible implications of their results, an elated Sagara comments, "Extending the current library of mechanophores with our rotaxane-based candidates would be useful for studying the mechanical properties of not only polymers but also cells and tissues, as our mechanophores can respond to much smaller forces compared to those involving chemical bond scission."

Simply put, rotaxanes could pervade all of natural science!