It was announced that Professor Hideo Hosono (Director of the Materials Research Center for Elementary Strategy) of the Laboratory for Materials and Structures, Institute of Innovative Research will receive the Von Hippel Award

, the highest honor given by the Materials Research Society (MRS)

of the United States. The award ceremony and a commemorative lecture on "Element Strategy in Materials Research" will be held at the MRS Fall Meeting & Exhibit in Boston, USA on Wednesday, November 28, 2018.

MRS is an organization of materials researchers founded in 1973 with the aim of promoting interdisciplinary research on materials. More than half of the members, which are from over 90 countries and regions, are researchers that hail from outside the United States and belong to diverse fields including chemistry, biology, physics, and engineering.

The Von Hippel Award, in honor of Professor Arthur R. Von Hippel (1898-2003), is presented to one researcher each year (regardless of membership) in recognition of the person's outstanding contribution to interdisciplinary research on materials. Hosono is the 42nd recipient, and the first Japanese person to receive this award.

The citation of this award is "for the discovery of high Tc iron-based superconductors, creation of transparent oxide semiconductors and inorganic electrides." His discovery of a high-Tc iron-pnictide superconductor, which has grown into a new continent of high-Tc superconductors comparable to high Tc cuprates, and development of oxide semiconductors such as IGZO used in OLED televisions, and inorganic electrides that have opened the way to catalysts for ammonia synthesis under mild conditions were highly evaluated as pioneering achievements. 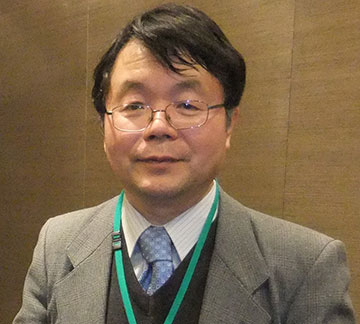 Professor Von Hippel made historic, pioneering achievements in many interdisciplinary themes, for which he was already famous when I was a student. I have been engaging in research with an awareness of running different fields for a number of years, so I am very pleased to receive this award. Materials science is a field where Japan is strong, so I was surprised to learn that I am the first Japanese winner. I would like to thank the many collaborators and the universities that have supported me, sponsors including the Japan Science and Technology Agency (JST)

and the Japan Society for the Promotion of Science (JSPS)

, as well as others who nominated me.

Over the last ten years or so, many have pointed out that presence of Japanese materials research has been rapidly lost in the world and that changes are needed. We need to promote unique research that goes beyond traditional disciplines such as by the adopted MEXT Outstanding School Program curriculum proposed by Tokyo Tech. Personally, I want to overlook wider fields and engage in research that leads to the creation of new substances and materials and their applications based on unique concepts related to untouched high-potential themes.